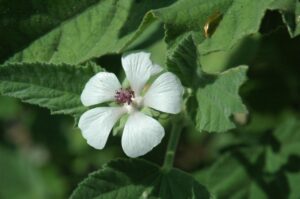 Marshmallow, Althaea officinalis, is an herbaceous perennial that was commonly grown in American gardens.

The genus Althaea is a Greek term that means “heal” or “stimulating the body’s own healing abilities”, and the Latin specific epithet officinalis, indicates a plant with some culinary or medicinal value.

A native to Europe, Western Asia, and North Africa, it was eaten in times of famine but also as a delicacy. Since all parts of the plant contain mucilage, they can be used to thicken soups, stews, and other dishes. The roots can be boiled and sweetened with honey to make candy. In the mid-19th century, French confectioners made marshmallow candy by whipping the root sap with sugar, water, and egg whites. In modern marshmallow production, the root sap has been replaced by gelatin.

As an herb, marshmallow was traditionally used as relief for irritation of mucous membranes in the mouth, throat, and stomach.

The marshmallow plant thrives with little maintenance and is quick to reseed itself. Mature plants may be divided in the fall. 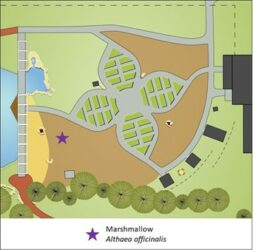 If grown indoors from seed, cold stratification for 4 to 6 weeks is required. Alternatively, natural stratification can be achieved by direct surface sowing the seeds in late fall to early spring. The plants grow best in rich, moist soil, in full sun but tolerate many soil types and conditions.

The plant is usually less than 4 feet tall with a spread of 2 to 3 feet. It is a good pollinator and its leaves feel surprisingly velvety.