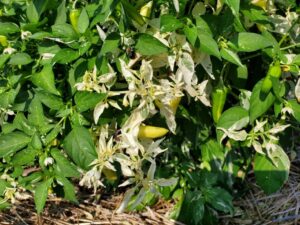 In the Edible Garden, the attractive 24-inch Fish pepper plants are easy to find because of their variegated green and white leaves. This cultivar of the species Capsicum annum originated in the Caribbean and was thought to have been brought to the United States in the mid-19th Century.

It was a popular food ingredient among African Americans in Philadelphia, Baltimore and the Chesapeake Bay region. Many crab and oyster houses blended the young cream-colored peppers into their white sauces used to enhance fish and shellfish recipes (hence the name “fish pepper”). 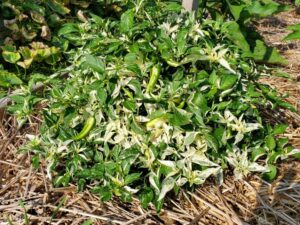 Fish peppers are a mutation of serrano or cayenne pepper, bearing the recessive gene that causes albinism. The young 2 to 4-inch fruits initially are pale cream-colored. As they mature, their color changes to green, orange, brown, and red, along with striations. Increasing color matches spiciness and heat. In the Edible Garden they are picked early so that they are not too hot.

Growing Fish peppers is similar to growing any other pepper variety. Heirloom seeds are planted indoors under a grow-light, taking 10 days to germinate. As the seedlings emerge, those with all-white leaves should be removed as they will be unable to photosynthesize. After transplanting at +45 days, the peppers should be ready for harvesting at +80 days. It is advisable to use gloves when handling Fish peppers as small amounts of spicy pepper oil can cause hours of irritation to the skin and eyes.

*The measurement of spiciness or heats of chili peppers are recorded in Scoville Heat Units (SHU) which is based on the concentration of capsaicinoids in the peppers. In 1912, the American pharmacist Wilbur Scoville created an organoleptic method for estimating SHU. An exact weight of dried pepper is dissolved in alcohol to extract the capsaicinoids and then diluted in a solution of sugar water. Decreasing concentrations of the extracted capsaicinoids are evaluated by a panel of five trained testers, until a majority can no longer detect the heat in a dilution. The heat level is based on this dilution, rated in multiples of 100 SHU. Modern methods of assessing SHU use chromatography (HPLC) to determine the capsaicinoid concentration.