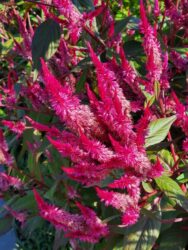 While visiting Bernheim’s Edible Garden this time of year, you will see large plants with a multitude of brightly colored feathery flowers. These are celosia argentea var. plumosa, known as celosia, Chinese woolflower, quail grass, soko and feather cockscomb.

Celosia blooms from June to frost. They are grown for their vivid colors as well as to attract pollinators. Flower colors include bright shades of red, orange, purple, yellow and cream. It is a self-seeding annual that thrives in hot and humid summers. 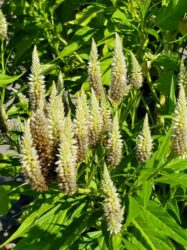 For earlier flowering, seed may be started indoors 6 to 8 weeks prior to the last frost date. Plants are easily grown in moderately fertile, moist, well-drained soils in full sun. However, light shade and dry soils are tolerated. To get a variety of color, you will want to purchase a mix.

Plumosa group cultivars range in size from 8 to 36 inches and tall varieties exposed to strong winds may have to be supported. To encourage more flowers to bloom, spent blooms should be deadheaded throughout the growing season.

Some of the celosia plants in the Edible Garden, grown from several years of self-seeding, show random abnormal flower growth caused by fasciation. This is a genetic mutation of the plant’s growing tip and can be caused by hormone imbalance or physical damage to the plant by insects or viral, bacterial, or fungal infections that leave the plant vulnerable. Fasciation causes the flower to be abnormally flattened which resembles a comb on a rooster.

Cockscomb or celosia argentea var. cristata results when all the flowers are crested. Some varieties are created for use as cut flowers and unlike most other flora, they can be dried and maintain their bright color. Since seeds dropped on a clean table are undesirable, there are varieties that produce few or no seeds and these are reproduced by cuttings.

Nutritionally, celosia compares well to other leafy greens, containing protein, calcium, iron, phosphorus, and vitamins A and C. The leaves are a traditional vegetable in Central and West Africa and collected when the plant is young, prior to flower production. They can be boiled or steamed and eaten as a side dish or combined with other vegetables in soups and stews along with their tender stems. Celosia is also eaten in Indonesia and India.

You can easily spot this beauty throughout the Edible Garden.