You are here: Home / PR / Famed Bernheim Golden Eagle, Harper, is on his way back to Kentucky 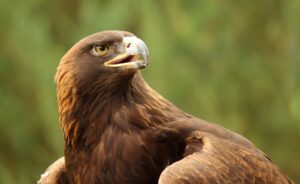 Bernheim officials are following the journey of an eastern golden eagle whose annual winter migration brings him to Bernheim. The raptor, which the public named Harper in 2015, received a new transmitter in February when he was captured and released during his annual winter stay at Bernheim.

Bernheim Forest Manager Andrew Berry said Harper’s fall migration back to Kentucky started on October 16 where he traveled south across Manitoba, crossing into the United States on October 23 heading toward the western tip of Lake Superior at Duluth, MN. 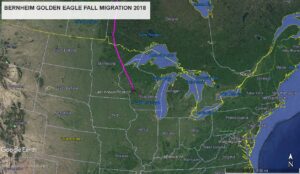 “This route has been followed for each spring and fall migration tracked so far,” said Berry. “We expect Harper will continue his travels south towards Bernheim and arrive sometime in early November.”

Golden Eagles found in Kentucky during the winter are distinct from the more abundant population found throughout the western United States. Collectively known as the ‘eastern golden eagles’, these birds are believed to have very limited interaction, if any at all, with the western population and have much lower population with estimates ranging from as few as 1000 to 2500 individuals.

Bernheim’s executive director, Dr. Mark Wourms, invites the public to follow Harper’s journey online at Bernheim.org where regular updates will be made as the team at Bernheim charts Harper’s course back to Bernheim.

“Join us as we follow his journey and learn from this amazing bird,” said Wourms. “Bernheim provides these eagles with the large forest expanses they need to over winter, hunt and bulk up in preparation for the migration north and subsequent breeding.”

Harper’s name is a nod to Bernheim’s founder, Isaac Wolfe Bernheim, who made his fortune in the bourbon business selling the I.W. Harper brand. Next year marks the 90thanniversary of Mr. Bernheim’s tremendous act of philanthropy when he gifted the forest that bears his name to the people of Kentucky.

“As we approach the 90th anniversary of Bernheim Forest, Harper reminds us of the importance of conservation,” said Wourms. “We are proud to continue Mister Bernheim’s legacy of environmental stewardship.” 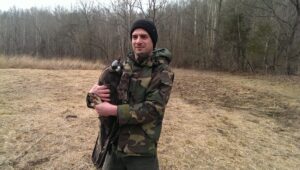 Wourms said we shouldn’t forget that while providing habitat to wildlife, Bernheim also provides clean air and water for communities throughout this region.