Bernheim: Celebrating 90 Years While Looking Towards the Future 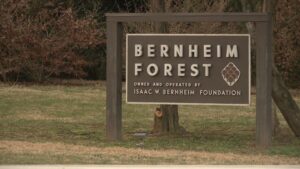 This event is hosted by the Filson Historical Society

Dr. Mark Wourms, Executive Director of Bernheim Forest, and Tom Block, great grandson of Isaac Wolfe Bernheim and immediate past President of the Bernheim Board will talk about Mr. Bernheim’s story, and his vision for the land he purchased in thanks to the people of Kentucky.  The mission, goals and development of Bernheim Arboretum and Research Forest will be explored.   As Bernheim celebrates its 90th anniversary, they will also address the exciting plans for the future of Bernheim.

Mr. Block is the retired head of Global Government Affair for JP Morgan Chase who moved to Louisville to become more involved with the legacy of his great grandfather.  In 2017 Tom became the first descendant of Mr. Bernheim to be Board President.  He has done research on his great father including a college paper on the statue of Henry Clay that stands in both the US Capitol and in the rotunda of the Kentucky  Capitol, his other gifts in Germany and Louisville, and of course the gift of the arboretum and forest.

Bernheim members can use the code FILSON to receive the discount.