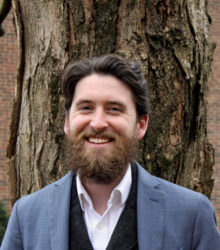 Bernheim welcomes Evan Patrick as the Natural Areas Manager. Along with the Natural Areas team, he manages over 15,000 acres of woodland, glade, wetland, and prairie within the natural areas that make up the majority of Bernheim’s 16,137 acres. His primary focus areas are habitat and wildlife stewardship, research facilitation, and conservation advocacy.

“I am excited to play a role in furthering Bernheim’s vision to promote ecological stewardship and inspire deep connections with nature,” Evan said. “Natural areas are critical to our health, the environment, and the wildlife that inhabit them. I am proud to be a part of protecting and enhancing this land, which is a legacy for future generations.”

Prior to joining Bernheim Forest in December 2019, Evan managed the natural areas at the Olmsted Parks Conservancy as well as the Parklands of Floyds Fork. He has more than seven years of experience in land stewardship.

Evan was born and raised in the Daniel Boone National Forest in eastern Kentucky, and his commitment to conservation was cultivated there. He left eastern Kentucky in 2008 to earn an anthropology degree from the University of Louisville.