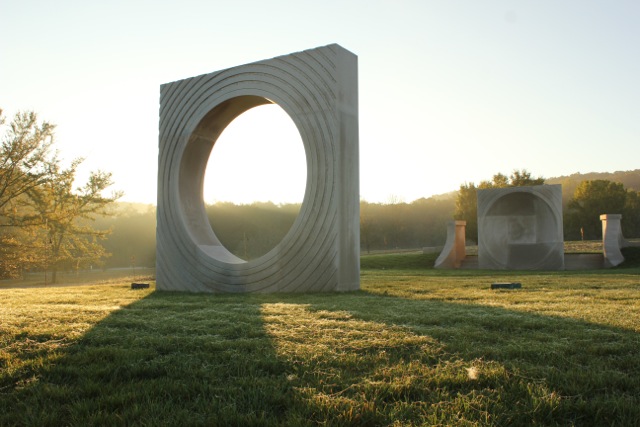 Constructed entirely out of more than a ton of solid stacked limestone blocks, Earth Measure beckons the visitor to explore notions of science, geometry, sound, and architecture while deepening one’s connection with nature. 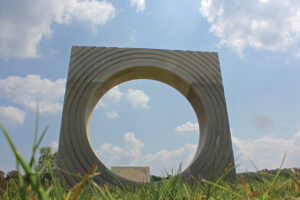 A Sited@Bernheim installation that has become nearly synonymous with Bernheim itself, Earth Measure was created by Louisville artist Matt Weir to honor the life and service of Barry Bingham Jr. (1933- 2006). Bingham, the former publisher of the Louisville Courier-Journal and Louisville Times who guided the publications to win three Pulitzer Prizes, was also an avid environmentalist, photographer, and supporter of Bernheim Arboretum and Research Forest. He served on the Bernheim Board of Trustees from 1970-2006 and chaired the capital campaign for the Platinum LEED Visitor Center and related projects.

Weir was commissioned to create a sculpture, and he looked beyond designing a traditional sculptural tribute. By researching Bingham and conducting interviews, Weir dug deep into the principles that were important to both Barry Bingham Jr. and Bernheim Arboretum and Research Forest. 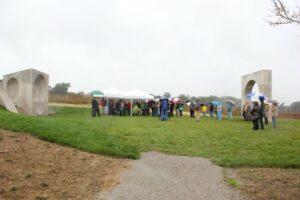 Bingham appreciated nature, the environment, and was passionate about its preservation. He believed that there was nothing more important than public service. Bingham also had a strong commitment to supporting the education and research, and protecting the land, that constitutes Bernheim Arboretum and Research Forest. He believed that photography and art were important means of capturing and appreciating nature as we know it.

Earth Measure is an educational, interactive, and multi-dimensional earthwork that must be experienced to be appreciated. It poses questions on the fundamental forms of the circle, square, and triangle. It invites discovery by all ages, both physically and intellectually. It places the visitor in a meadow and beckons them to tune in to acoustic ecology and soundscape science. In other words, the sculpture both frames the environment through its “lens” and captures the sounds of seasonal wildlife through audio waves directed to the center of the listening dome or parabolic sphere. It is simultaneously simple and complex, scientific and artistic, monumental and graceful.

Earth Measure fulfills Isaac Wolfe Bernheim’s deepest intention for the gift he gave the people of Kentucky when he established the arboretum and research forest. It creates an inspirational and uniquely contemplative space, or stage, for people to connect deeply with nature.

Bernheim is closed on Thursday, November 24.