You are here: Home / Bird Research / Eagle Updates from Bernheim

Sadly, we learned yesterday that the bald eagle rescued from Bernheim died from its injuries. Thank you to Raptor Rehab for providing exceptional care for the eagle, and to Eric Nally who found the eagle, and to Bernheim Volunteer Naturalist, Bill Napper, Bernheim Educators Wren Smith and Dan Pascucci for the rescue.

The eagle was rescued during the annual Christmas Bird Count and estimated to be a female juvenile nearly 4 years old.  She was found on Long Lick Creek in Bernheim on December 29th with trauma to the breast and interior. There was an extremely high level of lead in its blood that likely was caused by the eagle ingesting scavenged carcasses that were killed with lead shot. It seems the lead poisoning weakened the eagle to the point it fell out of a tree onto rocks below.

Bald eagles are seen at Bernheim throughout the year, but this eagle may also have been a migrant that ingested lead far away. During winter, many raptors travel south from Canada and the Great Lakes region to find refuge in Bernheim.  Lead poisoning is a serious problem not just for eagles, but also for many other species that scavenge on carcasses from bobcats, hawks, and coyotes. 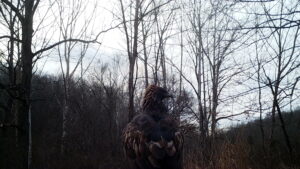 Special thanks to Beckham Bird Club, Cellular Tracking Technologies, Conservation Science Global Inc., and all the supporters of Birds of Bernheim that make this incredible project possible. The support from Bernheim’s members, volunteers, staff, and donors are what allow us to protect wildlife and steward their habitats.

The tracked golden eagle pair is spending time in Bernheim at familiar locations within their winter territory. The core of this is the knobs and hollows around Bernheim’s large forest block, where they cooperatively defend their territory while hunting and scavenging from November to March. This winter the pair has been using many of their preferred roosts and fields while not moving too much outside their core territory.  They mainly stay tucked into the forested hollows of Bernheim when heavy rains and winds occur and will soar throughout the knobs during sunny days with clear skies. On December 29th, the female golden eagle, Athena flew widely throughout Bullitt and Nelson Counties over large, forested areas including Knobs State Forest and crossing I-65 within the Crooked Creek corridor near Fort Knox. We are seeing the winter range for Athena and Harper this year remain very similar to previous years, covering approximately 7,000 acres.

Late January is the peak of winter raptor migration into Kentucky, with many hawks and eagles continuing to push south especially during cold spells beginning this week. The pair of golden eagles have two months left before their migration begins in mid-March, but much still to be learned before their departure. Last week we had an observation of a juvenile golden eagle at Bernheim and are always looking for other golden eagles in the area. For next installment we will be providing an update from the massive amount of data we received from Harper and Athena’s 2020 nesting season. Thank you for your interest and for supporting of Birds of Bernheim!