You are here: Home / Blog / D.A. Powell Leaves a Poem to Bernheim 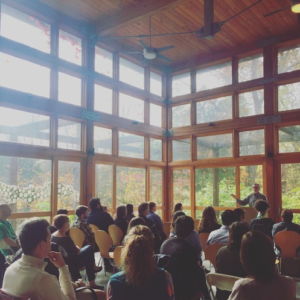 Earlier this fall, acclaimed poet D. A. Powell offered a Sunday afternoon reading at the Visitors Center. He read previously-published poems as well as a selection of new work, including one poem dedicated to Bernheim, where he spent his month-long residency, held in cooperation with and Sarabande Books. The title of the poem he has given Bernheim is Grove of Beeches.

Critic Stephen Burt, writing in the New York Times, said of D. A. Powell “No accessible poet of his generation is half as original, and no poet as original is this accessible.”

They need each other underneath

these sisters whose tangle of roots

goes so far down as to fix the uberous

soil in place. They hold the mushroom

earth its clay in place its dark matter

where the organisms that feed are

humble things suited to what

close enough to make a sound together

and one wind. You, Tityrus—so

begins the first eclogue of Virgil—

dallying under the canopy of beech.

It is a good opening for a book. Beech

bark was the papyrus of the Sanskrit

poets, its root gave us an Old English

word that meant both book and tree.

recumbent under just such leaves.

Under the overstory we sung.

Those who sit in speckled umbrage

of the limbs can hear the wood thrush

send down its double reed. Broods

All the notes are there. They teach

these weird sisters a wildness of song.

It is older than anything you’ve heard.

D. A. Powell is the author of five collections, including Useless Landscape, or A Guide for Boys, which received the National Book Critics Circle Award in poetry. His honors include the Kingsley Tufts Prize in Poetry and an Arts & Letters Award in Literature from the American Academy of Arts & Letters, as well as fellowships from the Guggenheim Foundation and the National Endowment for the Arts.