You are here: Home / In the News / Crowds force Bernheim Forest to briefly close to new visitors on Wednesday

Crowds clamoring to see the newly installed wooden giants at Bernheim Forest on Wednesday were briefly not allowed to enter the park amid a rush of spring break visitors.

As people took advantage of temperatures in the mid-60s and traffic backed up to the interstate, Bernheim decided to close the forest to new visitors for about an hour.

In early afternoon, Bernheim posted on Facebook that traffic was backing up on Highway 245 and Interstate 65 and recommended people visit after 4 p.m. or try again Thursday.

Related: How the magical larger-than-life trolls at Bernheim Forest came to life

Bernheim is hosting a “Giant Spring Break Adventure Week” with hands-on activities scheduled for 11 a.m. to 3 p.m. daily and guided nature hikes between 2 and 3 p.m.

A concert was also scheduled for Wednesday around 1 p.m.

Spokeswoman Amy Landon said that the turnout “has surpassed even our wildest expectations for visitor interest.”

“We are thrilled  that so many people are visiting to see the giants and connect with nature, and we ask for patience during these times of increased traffic and to use caution as you drive through the forest,” she said.

To celebrate the 90th anniversary of Bernheim Forest, Danish artist Thomas Dambo built three giants, which will call the forest home for approximately the next three years.

More: Visitors come to the rescue after stones in a Bernheim troll’s bracelet disappear 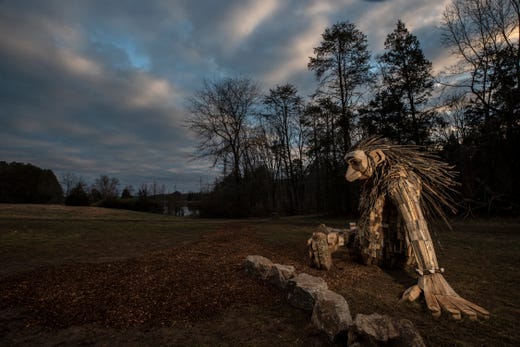 The much buzzed-about giants debuted a few weeks ago.

Elina, her mother “Momma Loumari” and brother “Little Nis” are made of recycled wood from pallets, fallen trees, bourbon barrel staves and scraps from Louisville Slugger Museum and Factory.

For safety reasons and to keep the giants intact, Bernheim asks that people don’t climb on Momma Loumari. Visitors are allowed to stand on the hands and feet of the other two giants.

Bernheim, with more than 16,000 acres, is the largest privately held forest dedicated to conservation and education in the eastern United States.