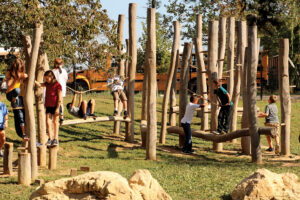 Bernheim Forest initiative, The Children at Play Network, is thrilled to announce it has received a major grant which will increase the opportunities for adventurous play in nature for children around the region.

The first zone of Playcosystem, which was completed in 2021, offers children an opportunity for unstructured play in nature, which supports healthy child development, and is the result of more than 12 years of efforts by Bernheim’s Children at Play Network (CAPN).

We anticipate finishing two additional zones in the next two years bringing the total acreage of Playcosystem to 17 acres. Three distinct play zones will  include nature play, adventure play, and exploration play.

One of the most exciting new features will be the construction of a wheelchair-accessible treehouse. Taking advantage of topography and ramping, the Playcosystem treehouse gradually allows a wheelchair user to end up fifteen feet above the ground in an enchanting play structure that doubles as a transition between the adventure play zone and the forested exploration play zone. Bernheim will also make available all-terrain wheelchairs so visitors can then get further into the wooded areas.

“Imagine being in a wheelchair and discovering that you have a way to explore the upper branches of a tree,” said CAPN Director Claude Stephens. “We are building something that is intentionally more than a playground – a play laboratory to inspire more natural play environments throughout the region, as well as a space that provides a wide spectrum of play here at Bernheim for every child of every background and ability.”

According to President and CEO Mason Rummel, “the James Graham Brown Foundation has a long-standing history of supporting important Kentucky cultural assets like Bernheim Forest.  This project also connects to our educational mission and we are excited to help Bernheim cement its role as a national leader in innovation and research into the design of outdoor play spaces that support the physical, mental, social, and emotional health of children.” 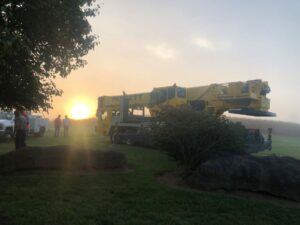 To celebrate this exciting news, Bernheim brought in some giant rocks that will be a highlight of Zone 2. The rocks were a gift from the Padgett family living near Bardstown, KY, who had 19 very large stones that they needed moved from their property to make way for a building project, but whose children enjoyed playing on the rocks in their back yard. The children ALSO loved playing at Playcosystem, however, so they thought if the stones moved to Playcosystem they would live on as a play structure for their children and thousands of others. After looking at the huge fossil filled limestone rocks formed over 250 million years ago as part of a shallow inland sea, the Playcosystem team fell in love with them. We know that children love clambering around on rocks.

Moving 19 stones from Bardstown to Bernheim is no small feat, however. It would involve a 75-ton crane, a 12 ton fork lift, several heavy duty flatbed trucks, a team of crane operators and riggers, and good old fashioned planning and grit. Now 18 of the 19 stones have been moved to Playcosystem to create a rock scramble play opportunity along the drainage that runs from Spirit Nest down toward the low end of the Adventure Play Zone. 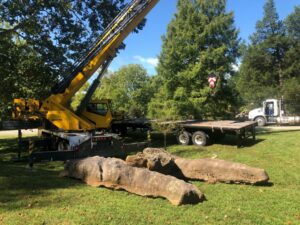 The rocks accentuate the water course running through the project. One of them, with a natural curvature that makes a nice seat, was selected for a future wheelchair pad that will be located directly in the stream course. We hope to add grab bars to that stone so that children using wheelchairs can transition out of their chair to sit on a fossil filled rock. Three of the rocks create a natural stone table. And other rocks create the bones of a future wetland area complete with a bridge stone over the water channel.

The 19th stone which is more than 25 tons in weight and 26 feet in length was erected vertically at the entrance to Guerrilla Hollow along the main loop road. Bernheim’s operation team prepared a hole deep enough to bury that stone 1/3 into the ground. It now rises 16 feet into the air to create a beautiful new feature at Bernheim. It’s situated so that you can take photos of it that make that stone look like it is growing.

So come on out and scramble around on rocks.