You are here: Home / Deep Connections with Nature / Bug-A-Palooza Daily Bug: The Often-Misidentified Harvestmen – Most Poisonous Spider in The World, Or a Simple Softie?

“It’s the most poisonous spider in the world, the fangs are just too small to bite people.” 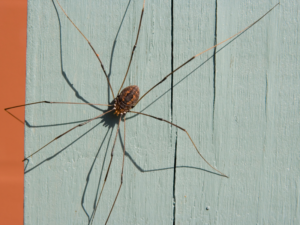 These are just a few of the many things I heard about harvestmen this past summer during Bernheim’s first summer camp in over two decades. Every week children were repulsed, enthralled, and frightened by the critters who shared our space, often being discovered beneath picnic tables or ambling up our beloved maple tree’s trunk. These little bugs certainly caused their fair share of shouts and squeals, but also provided an excellent opportunity to discuss multiple important topics.

Daddy long legs, or harvestmen, are quite common yet rather misunderstood. They are not spiders, as many assume, nor insects, but in fact their own order of arachnids called Opiliones.

But how can someone tell? There is such a wide variety of tiny, multi-legged creatures roving this amazing planet that it can be confusing at times to keep them all straight. Here are the major factors that differentiate insects, spiders, and harvestmen. 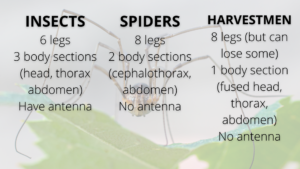 There is a myth, one that I had believed for quite some time, that harvestmen are incredibly venomous but simply were too small to bite humans. This is false, and these tiny creatures pose zero threat to humans. In fact, harvestmen don’t even possess venom glands, which is another major way they deviate from spiders. The simple reason for this is they don’t need them. Harvestmen are scavengers who roam around at night searching for a variety of food sources. Because they’re omnivores, they eat decaying matter, small invertebrates, fungi, plants, and most anything else they come across. They prefer shaded, somewhat damp areas, which is why you will often see them sitting on the undersides of picnic tables, on tree trunks, and on the forest floor.

The legs for which harvestmen are famous serve a multitude of functions besides simply traversing the world. The second pair of legs are typically the longest and are used as feelers of sorts to detect surfaces and food, with the tiny claws on the end being used to grab what they find. At times you will see the harvestmen cleaning their legs of debris by running them through its mouth. Finally, these appendages somewhat easily break off, and continue to twitch for up to an hour after being detached. This may provide the harvestmen an opportunity to escape if a predator is distracted by the movement of the leg.

So be on the lookout for the quite common, yet often misunderstood harvestmen. Don’t shriek (unless it is in pure delight) and watch as this arachnid sways about on their spindly legs. The harvestmen serve as an excellent entry into becoming more comfortable around “creepy crawlies”, so if you are feeling brave perhaps let it crawl on your hand: just be ready to catch it before it walks off the edge!