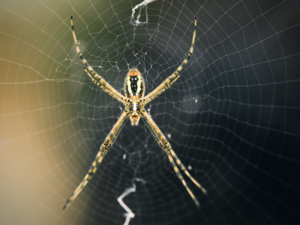 I’ve never been fond of spiders. In my younger years, I’d claim they had too many legs (yet despite that statement, the octopus was somehow my favorite animal), and the way they skitter about made my heart drop. Perhaps it is simply that primal fear that many of us still carry within, the fear our ancestors possessed to stay alive despite a lack of modern medicine, but I always found myself cringing anytime a spider larger than a dime scampered, or even just sat, in my view. When I determined my future career involved the outdoors, I decided it was finally time to overcome this unfounded aversion. Rather than squashing spiders, I began trapping them in cups or tissues to carry outside, even if that involved me sprinting to the nearest window while begging them not to escape. Rather than averting my eyes whenever I came across one, I tried to observe. It quickly came became apparent that trying to understand what you fear is the best way to stop fearing it.

The first time I saw a yellow garden spider, Argiope aurantia, was in Bernheim’s Sensory Garden near the Emerging sculpture. She was the most brilliantly colored spider I had ever seen, possessing bold black and yellow patterns, and her striped legs were elegantly long. Entranced, I watched the enormous spider delicately and daintily traversing the tops of the flowers, mending pieces of her web as she went. I noticed a strange zigzag design across the center, and later learned it is called a stabilimentum. Though the exact purpose is unknown, many theorize it is to warn birds of the web’s presence, so they do not fly through it. At the time, it looked to me like a charming decoration, a notion I still believe matches their graceful appearance. When an errant moth found itself tangled in her masterpiece, the spider dashed towards it, within seconds having it wrapped in a tightly knit package.

From that moment, I too was caught in her web, enchanted by this hauntingly beautiful arachnid. I’d stop by on my way to my car each day, and nearly without fail would see her hanging in her claimed territory of the garden. On occasion, I’d comb the plants for others and eventually found a much smaller, yet very similar looking spider nearby. This turned out to be a male of the species, who typically are about a third the size of the females and not as vivid. As weeks progressed, I noticed her abdomen swelling, later learning it meant she was going to lay an egg sack soon, and when she was significantly smaller one day knew a legacy had been left. As the weather became chillier, I saw her less frequently, and eventually I did not see her again. But the following summer I found five garden spiders amongst the flowers and like to think they were her descendants.

This garden spider instilled in me a new appreciation for the eight-legged creatures I had once shied away from. Anytime I happened upon a spider weaving a web, I now watched with intrigue rather than brushing it down in hopes of warding the creator away. I’ve also observed some fascinating hunting strategies, like colorful crab spiders hiding amongst flower petals to snatch unsuspecting insects, a fishing spider hunting on the surface of a pond, or funnel weavers who build tornado-like webs and lie in wait at the bottom. Spiders are incredibly beneficial to keep around, as they can eat pest insects who would otherwise infiltrate gardens and plants. Rather than disposing of any who find their way into my home, I either release large spiders outside or try to set up smaller ones in my various pots so they’ll devour any invaders who may hurt my beloved plants. It’s a win-win situation really: my plants are protected, and the spider has a cozy abode.

To this day, I still occasionally get chills while watching a spider creep or climb around. There was even one late evening I couldn’t help but retreat indoors after seeing a host of diamondlike eyes glittering around me on the porch. Certainly, it was beautiful, everyone should observe how bewitching spider eyes look reflecting back at them, but that aversion still is there. And that’s okay! The important thing is that we recognize how valuable these creatures are, not just to us as humans but to the ecosystems they are a part of. The act of being outwardly intimidating or eerie does not mean a creature deserves fear or revulsion, in fact it is quite the opposite: they deserve our attention and understanding, even if it is difficult.

The gorgeous yellow garden spider will be on display during Bug-a-Palooza, and I highly encourage even the most spider averse person to go observe. They truly are remarkable and leave quite the impression after watching them pluck their way across their webs.