You are here: Home / Archive / Bugs of Bernheim / Bug-A-Palooza Daily Bug: Dragonflies – The Living Legends that Surround Us 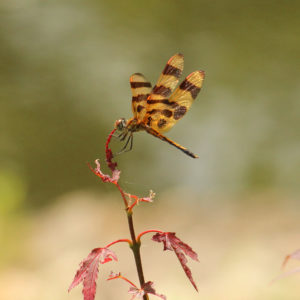 The Kingfisher Pool is a very simple, often overlooked spot at Bernheim, but it holds a special place in my heart. Tucked away down the hillside of the Education Center, this small body of water is home to an abundance of vocal frogs, duckweed, and the occasional green heron. However, there is another creature that patrols these serene waters, carving out territories and defending them ferociously. It is one that is seen quite often and typically ignored, most people instead favoring the scaled and slimy inhabitants of the ponds and lakes. It is a living legend, as dangerous and vibrant as the mythological beast it is named for. 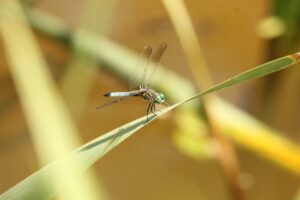 These incredible insects, belonging to the order Odonata, truly are a wonder of nature and fascinating to watch zoom about their watery abodes. They come in an array of colors, representing nearly the entire rainbow across their species – above the waters of Bernheim alone you will be delighted to a display of blues, greens, reds, whites, and yellows. They also reach impressive sizes, with our largest dragonfly being the green darner, which can reach nearly four inches in length. One of the most intriguing things about this creature is its unparalleled flying abilities, which are the strongest in the insect kingdom. They can hover in place, as well as suddenly zip up, down, forwards, backwards, and side to side. This is due to their wing structure and control: their two pairs of wings are operated by individual muscles, allowing them to be moved independently of each other which results in astonishing acceleration and agility. In addition, on the outer edge of each wing is a small ‘wing weight’, which stabilizes flight.

These impeccable flight skills are mostly used for hunting, and like beasts of legend, these insects hunt well. Dragonflies have an overwhelmingly successful catch rate, possibly the highest in the animal kingdom, at up to 95%. Naturally flight is an important factor in this, but if dragonflies weren’t cool enough for you there are other adaptations that factor in. Their eyes are specially adapted to detect dark spots (aka prey) against the sun, and their brain predicts the prey’s movements, allowing the dragonfly to intercept midair.

Dragonflies are not only stalking in the skies; they also are formidable hunters as aquatic nymphs. Like many insects, they prowl the waters for up to a few years before crawling into the sunshine to molt and emerge as adults. While in nymph form, dragonflies lack wings and therefore have a quite different, and somewhat entertaining, fashion of travel. They draw water into their hind end and forcefully shoot it out like a jet. This allows them to zoom through the water, snatching up other invertebrates, small fish, and tadpoles to munch on as they go.

They quite literally fart their way around. How amazing is that?

There are other members in the order Odonata, specifically the more relaxed, dainty, and aptly named damselfly. Smaller and far less ferocious, these insects have a fluttery flight very different from their relatives. They also hold their wings in a different fashion: while dragonflies nearly always have their wings flat out at nearly 180-degree angles, damselflies, being the respectable insects they are, fold them neatly together above their backs. But damselflies can be just as colorful and stunning as their legendary counterparts: one only needs to look at the ebony jewelwing as an example.

Next time you cross the bridge at the Olmsted Ponds or seek out solace at the Kingfisher Pool, spend some time watching these ‘mythical’ creatures. Perhaps you’ll see a female dipping her abdomen into the water to lay eggs, or two males chasing each other around as they establish territories. Count the colors and patterns you see and do be sure to applaud if you’re lucky enough to witness one successfully hunt. Paying attention to the insect world reveals some incredible displays, and dragonflies are rather flamboyant performers.