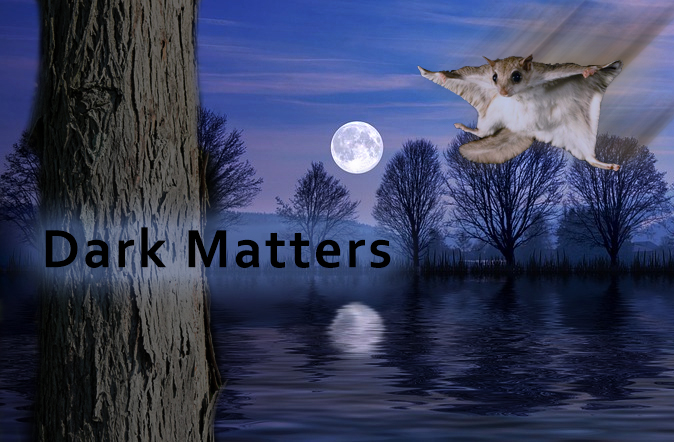 As the sun sets in Bernheim, when most other animals are settling down for the night, a small, brownish-gray squirrel with big, bulging eyes begins to stir. From high above the forest floor, when the darkness is just right, it pokes its head out from its favorite tree cavity, then cautiously climbs out onto the tree trunk.  Suddenly, and bravely, the little squirrel leaps into the dark void, all four limbs spread-eagle, and silently glides through the forest like a ghost. National Geographic said it best, “when you have fur instead of feathers, going airborne takes some guts.”

Southern flying squirrels (Glaucomys volans) are nocturnal creatures and seldom seen in Bernheim. However, they are not rare and it’s quite possible Bernheim is home to just as many flying squirrels as other types of squirrels.

How do they fly? Bats are the only mammals capable of true flight. So technically, flying squirrels don’t fly, they glide. Typically, they only glide from 20 to 30 feet, drifting from tree to tree, but they can glide much further. It’s estimated for every foot of vertical elevation, they can glide three feet horizontally. Theoretically, jumping from the top of a 100-ft. tree would allow them to soar the length of a football field!

If you’ve ever seen a skydiver or base jumper wearing a “wingsuit”, then you have an idea of how these squirrels fly. Not surprisingly, the idea for the wingsuit was inspired by flying squirrels. Between the wrist of a flying squirrel’s front legs to the ankle of its hind legs, there is a membrane called a patagium. When their arms and legs stretch spread-eagle, the membrane forms a wing-like gliding surface.

Dark forests can be a hazardous place to fly. Steering safely around branches or other obstacles requires tremendous agility. Flying squirrels have many special adaptations, perfectly evolved for their habitat. They’re equipped with superior night vision. Their noticeably large, cute, Bambi-like eyes allow them to see as well at night as humans do during the day. Also, flying squirrels sport the longest whiskers of any squirrel. Whiskers provide exceptional touch sensitivity and may warn them of an impending poke in the eye. Just to be on the safe side, they do close their eyes for a split second when they come in for a landing.

Their large, flat tails help them glide, providing stability, allowing them to twist and turn in highly maneuverable ways, performing 180 degree turns, twists, and even loops if they want! Just before they land, they will point their tails straight up, causing their heads to rise, their bodies lifting vertically, then all four feet touch-down on the tree trunk landing spot at the same time. In a flash, they scurry to the opposite side of the tree to deflect predators that might have been tracking their flight trajectory.

Recent discoveries reveal that flying squirrel super-powers go beyond what we humans can see or hear. Surprisingly, research revealed that a flying squirrel’s belly glows bubble-gum pink under UV light (a.k.a blacklight). 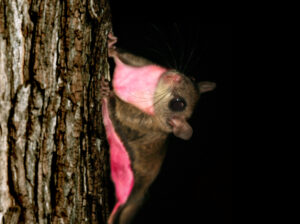 Not only that, but many of the sounds they make to communicate are ultrasonic. Without special equipment, humans are incapable of seeing UV light or hearing ultrasonic sounds. What humans may perceive as a dark, quiet, winter Bernheim night may actually be a noisy, bustling forest filled with flying, pink glowing, ultrasonic chattering flying squirrels! Bernheim is truly a wonderland.

Even though it’s rare to see a flying squirrel, there are other fun ways we can look for their presence during the day. As omnivores, they have a varied diet and eat insects, blossoms, buds, fungi, lichen, and bark, but acorns and hickory nuts are particular favorites. The way a flying squirrel eats a nut is unique from any other animal in the forest. Instead of breaking a nut into many pieces, like other squirrels and chipmunks do to get at the nutmeat, a flying squirrel will chew a single, neat, smooth-edged hole into the nut, leaving behind an empty, mostly intact nutshell.

So the next time you’re out hiking on one of Bernheim’s forest trails, look for these lying on the ground. If you find one, be sure to stop for a moment, look-up, and imagine, most likely all around you, flying squirrels are nestled in their tree homes overhead, taking a siesta until nightfall. 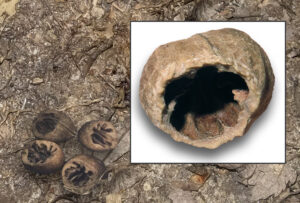 Flying squirrels spend their nights busily doing what most other squirrels do during the day. They forage for food nearly year-round during the nighttime, socialize, and do their absolute best avoiding being eaten! Owls, raccoons, foxes, weasels, bobcats, and climbing snakes are some of their common predators.

Not much is known about the southern flying squirrel’s courtship and mating. Some theorize their recently discovered pink-glowing belly may play a role in mate selection, though it is too early to say for sure. We do know flying squirrel mothers may give birth up to twice a year, in early spring or late summer. After a gestation period of 40 days, typically two or three babies are born but there can be between one to six young.

The newly born, helpless babies are blind and hairless, about 2.5 inches long from head to tip of the tail, and they weigh about the same as a quarter. Their gliding membrane, however, is already fully developed. Their eyes open in about three weeks and their squirrel talents develop quickly at that point. They are usually weaned when they are about six to eight weeks old.

Survival requires their gliding capabilities to develop quickly. The mother squirrel, knowing what’s best, encourages her young to hone their flying skills only a few weeks after they have opened their eyes. To speed them along, she will coax them to take that first leap of faith and when necessary, gently grasp them by the nape of the neck with her mouth, then toss them out of the nest into the air! Instinctively, the young spread their limbs to catch the air and glide. Though a bit clumsy at first, by eight weeks old, they can execute 90-degree turns and other maneuvers as well as adults. Young born in late summer enjoy the added benefit of staying in their mother’s care through the entire winter.

For many animals, the cold, long nights of winter are too extreme. Bats, snakes, frogs, and groundhogs all hibernate, but flying squirrels, while sometimes less active during extreme winter periods, do not hibernate. These hardy, intelligent animals stay active all winter and have several ways to survive long, cold, extreme winter conditions or when food gets scarce. They can lower their metabolic rate and body temperature to conserve energy. Being very social creatures, they will also huddle together in high numbers, sometimes groups up to 20, to benefit from one another’s radiant heat. Unfortunately, with no flying squirrel nest cam to view, we’ll just have to use our imagination to picture them all snuggled up together, warm and cozy in their nest, while a blizzard rages outside their tree cavity.

The most critical aspect of flying squirrel survival is a healthy forest with lots of nut or acorn-bearing trees providing food, a clean water supply, and scattered dead trees and snags providing shelter. According to Global Forest Watch, from 2000 to 2019,  the U.S. experienced a 14% decrease in that type of habitat since 2000. We are all so fortunate that for the last 91 years, Bernheim has worked tirelessly to protect our forests and streams, providing wildlife habitat for flying squirrels and all the other amazing creatures that call Bernheim Forest home. Flying squirrels also contribute to keeping Bernheim’s forest healthy. Their foraging activities promote new forest growth by dispersing acorn, hickory, and other hardwood seeds.

This winter when you look out a window and notice a night sky filled with stars sparkling like diamonds, or the brightness of the moon lighting up the snow-covered ground, I hope you’ll let your mind wander outdoors for a moment and imagine hundreds of pink-glowing, ultrasonic, flying squirrels, gliding from tree to tree in the winter Bernheim Forest.

If you agree flying squirrels are extraordinary, please help us raise awareness about these seldom seen, seldom discussed creatures by sharing this story with your friends on your favorite social media platform(s).