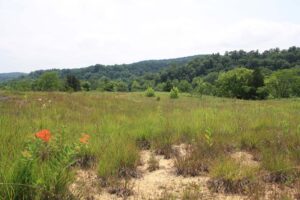 Bernheim Arboretum and Research Forest is home to several cedar glades and barrens, ranging in size from 0.5 acre to 20 acres. As one of the rarest ecosystems in the world, cedar glades are openings in the forest dominated by herbaceous species such as ferns and grasses. They are predominantly found in areas of thin soil over limestone bedrock and in locations maintained by prescribed burns. Due to development, agricultural activities, and misuse, they have become rare and degraded.

Over the last 20 years, Bernheim has been restoring glades found in our forest by using prescribed burns and removing invasive species. To better understand the restoration process, Bernheim conducts studies within these glades to determine plant and insect diversity, soil properties, and the effects of fire on the glades.

In the early 2000s, studies were conducted to determine the possible nutrient loss from prescribed burns and the soil properties compared to surrounding areas. The study found a loss of nitrogen on the edge of the glades after a fire and overall low nitrogen levels across the area. Interestingly, many plant species have adapted to low nitrogen levels in the glades, allowing unique and rare plants to grow and this rare ecosystem to thrive.

Glades have a high diversity of plant species, and Bernheim’s glades were inventoried to determine plant composition. Over 162 herbaceous species, 36 tree and shrub species, and 34 kinds of grass, rushes, and sedges were found. Included in this number were several threatened plant species. 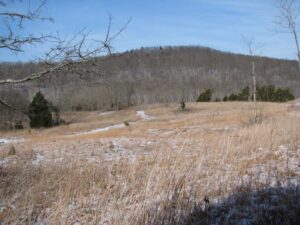 Cedar glades and barrens are globally unique and fragile habitats. They are home to rare plants, butterflies, and other animals. Bernheim will continue to monitor the health of these areas and work to improve and protect their unique habitat.