You are here: Home / Blog / Bernheim Under the Sea 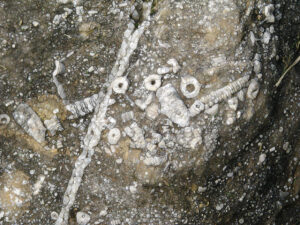 Bernheim Forest has great beauty and is teeming with life throughout the year. The abundance of animals and plants is a feast for all of our sense. We know of the changes to this land over the past several centuries, from the vast old growth forest filled with soaring oaks, hickories, and chestnut trees and inhabited by bison, elk, deer and other animals in a diverse and thriving ecosystem to a land that was deforested and farmed for a century, to the present healthy and mature forest that has returned. Seldom do we think of the enormous changes that have taken place over a far greater time scale. The earliest evidence of life we find in this area is not of the dynamic forest; it is the evidence of the sea that covered this land for many millions of years during the Paleozoic era. The rock exposed in Bernheim was deposited approximately 350-500 million years ago while this area was beneath a vast shallow sea.

This area was teeming with life at that time as well, full of the animals and other organisms that inhabited that sea. As the sea changed over time in depth, temperature, and flow of its currents, its inhabitants changed as well. Several species of fish lived in this sea. Sharks were present, as were arthrodires, armored fish that could exceed twenty feet in length. Those fossils are exceptionally rare. More abundant in this area are the fossils of other animals that lived in that sea. Throughout Bernheim are scattered fossils of sea sponges, snails, many types of coral, and shellfish of various types, including many species of brachiopods, Kentucky’s state fossil. Also present in this sea were crinoid, a relative of starfish, sand dollars, and sea urchins. Crinoids lived in enormous numbers and their remains can be found embedded in many rocks throughout Bernheim. Orthoceras, a hard shelled predecessor of squid that could grow to at least fourteen feet also called this sea home. These animals are part of our past and formed, quite literally, the land we walk on. Their remains are a major component of the limestone and other sedimentary rock that is under our feet at Bernheim.

Visit Bernheim and marvel at the diversity of life all around you and consider the lift that came before and helped to shape our world. Look for signs of that ancient life as you enjoy your walk on the 40+ miles of trail. Consider visiting the Fire Tower, where some examples of that life are on display as you view the area from the best (and highest) location in the forest.