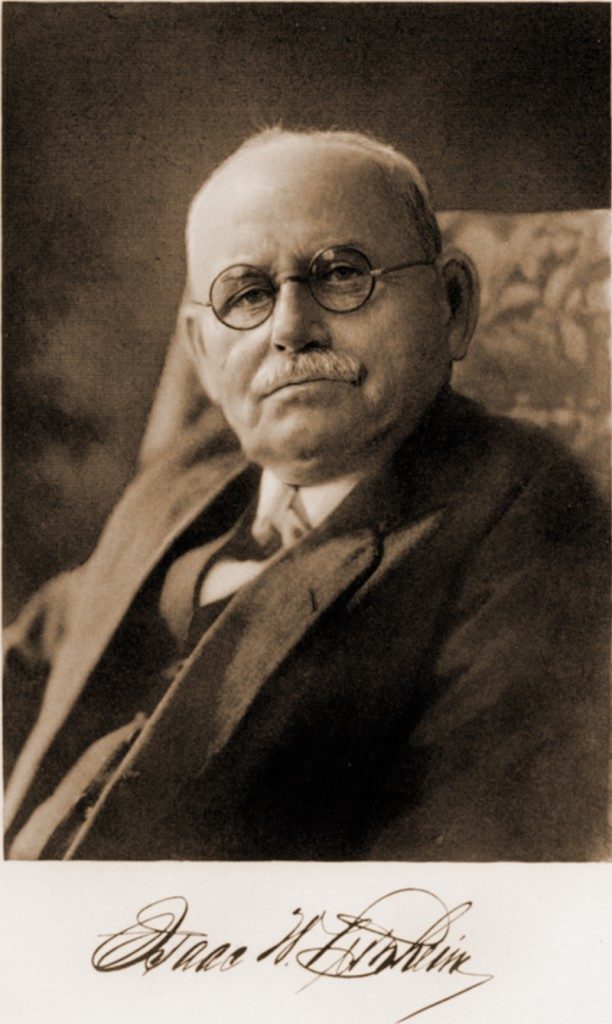 This year Bernheim celebrates the 90th anniversary of the creation of the I.W. Bernheim Foundation.  The story of young Isaac Wolfe Bernheim coming to this country as a poor young man, amassing a fortune, and making this fantastic gift has been told many times in this website and elsewhere.  I offer a few thoughts on how this gift came about.

Mr. Bernheim was a hard working businessman with an intense focus on making a quality product (I. W. Harper Bourbon) and leading his company to success.  That success and attendant wealth gave birth to a desire to repay the state and the country that made it possible.  He was, however, essentially an urban man who was at home in the business world, in the financial marketplace, and in the company of other successful men.  His philanthropy started long before the I.W.Bernheim Foundation was created and it was often directed within that same urban environment.  Libraries were built and expanded in Cincinnati and Paducah; statues of notable Americans were commissioned and installed in Louisville, Frankfort, and the Capitol in Washington D. C.; a new hospital wing was built in Louisville, etc.

His leisure activities were also centered in the cities he lived in and visited.  He was not a camper, hiker, fisherman, or hunter.  He had an interest in horse racing but rarely attended races at Churchill Downs.  He didn’t participate in sports, although he attempted, briefly, to play golf when he was in his 80s.  So, where did Isaac W. Bernheim get the inspiration for this enormous enterprise in a somewhat remote and very rural area?

His own statements on this subject would seem to solve the mystery.  He owned a beautiful estate in Anchorage, Kentucky with a fine house and about three hundred wooded acres.  He enjoyed walks with his wife, Amanda, through their property and observing the trees, birds, and wildflowers of the area. The Bernheims discussed converting this property into an arboretum and opening it to the public.  Then, in 1922, Amanda Bernheim passed away and with her, it seemed, the dream of a natural retreat for the public.  Isaac Bernheim dealt with his grief, sold the property in Anchorage, and moved on to other interests.  However, in 1928, the opportunity arose to buy a large block of rural land in Bullitt and Nelson counties and the dream was resurrected. So, there is a simple, straight forward answer to the question of his motivation. But perhaps there is more to it.

Isaac had extensive exposure to wooded landscapes.  His childhood was spent in the small village of Schmieheim, Germany, on the border of the Black Forest.  At the age of 16, he left for employment, first in Mannheim and then in Frankfurt.  His journeys between his family home and those jobs took him along a beautiful route through the Rhine River Valley. When he traveled to America at the age of 18, his first year was spent in eastern Pennsylvania traveling along back roads selling household goods through the Lehigh River Gorge and along the Susquehanna River. From Pennsylvania, Isaac moved to Paducah, Kentucky, and spent years selling and promoting bourbon in rural Kentucky, Tennessee and Missouri.  Even after moving to the big city of Louisville, business interests took him to the countryside.  For some time. I. W.  Harper was produced in rural Nelson County along Knob Creek, a few short miles from Abraham Lincoln’s boyhood home.  I. W.  Harper was also distilled at the Limestone Springs Distillery just a few hundred yards north of Bernheim’s entrance.  Journeys to inspect those facilities familiarized him with this beautiful area.

So, the very urban and sophisticated Isaac W. Bernheim was no stranger to the beauties and peace of the forested countryside.  We are the fortunate beneficiaries of those travels and of his great generosity.

In 2019, Bernheim celebrates 90 years of connecting people with nature. At over 25 square miles, Bernheim is the largest privately held forest dedicated to conservation and education in the region. Our arboretum is home to plant collections of over 8,000 varieties, public art, and educational programming for thousands of students. Our pristine forests hosts hikers and outdoor adventures alongside research and conservation projects which will serve to protect the environment for future generations.