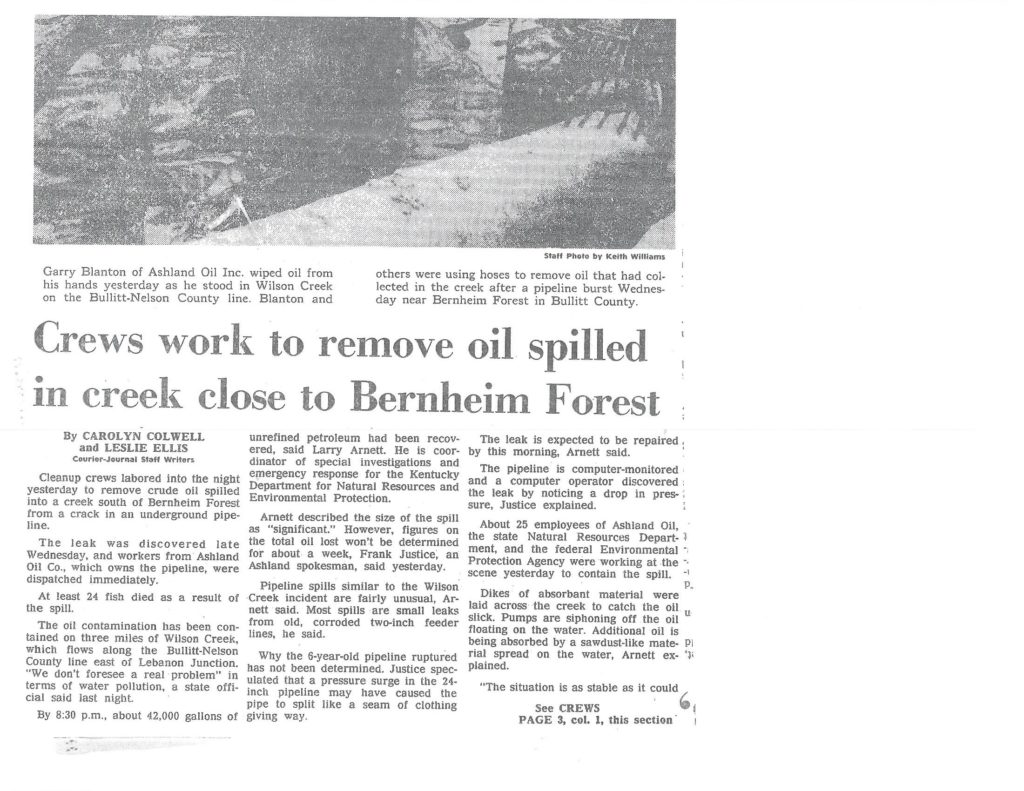 There are many reasons why Bernheim is fighting so hard against the proposed LG&E pipeline, including an incident that highlights the dangers of pipelines in Bernheim.

Most people are unaware of the oil pipeline rupture near Bernheim 40 years ago that seriously impacted Wilson Creek (now part of Bernheim’s 16,137 acres). Bernheim’s archives hold several news articles about the oil spill of 252,000 gallons of oil and the following cleanup. The 6-year old oil pipeline, owned by Ashland Oil at the time, ruptured on October 24, 1979 and led to numerous fish and wildlife lost from the contamination. Several springs, including one used for drinking water, were severely damaged, in addition to the damage to vegetation and soil that was dug out and removed from the site.

Bernheim’s Executive Director at the time, Charles (Mac) McClure stated “the ecology of Wilson Creek will certainly be changed”. Crews worked for weeks to remove the spilled oil, with dikes, pumps, and sawdust was used to soak up oil and remove the contamination. Neighbor, William Rhodes, who depended upon a nearby spring for his drinking water that was affected, stated “I think the springs are shot for my lifetime”.  This environmental disaster on Wilson Creek serves as a reminder of the dangers posed by pipelines on natural areas and demonstrates the lasting impacts that pipeline ruptures can have.

Even with the best technology and equipment, these accidents do occur and create impacts that are felt for decades in the future. Wilson Creek still bears scars from this episode, and the pipeline still cuts across Bernheim’s natural areas in the Wilson Valley.  As Bernheim continues fight against an LG&E proposed natural gas pipeline, these lessons from our past remind us why pipelines are not compatible with conservation.