You are here: Home / In the News / Bernheim following golden eagle Harper on his annual journey north

CLERMONT – Bernheim officials are following the journey of an Eastern Golden Eagle whose annual winter migration brings him to Bernheim. The raptor, which the public named Harper in 2015, received a new transmitter in February when he was captured and released during his stay at Bernheim.

Golden Eagles found in Kentucky during the winter are distinct from the more abundant population found throughout the western United States. Collectively known as the ‘Eastern Golden Eagles’, these birds are believed to have very limited interaction, if any at all, with the western population and have much lower population with estimates ranging from as few as 1000 to 2500 individuals.

Bernheim’s executive director, Dr. Mark Wourms, invites the public to follow Harper’s journey online at Bernheim.org where regular updates will be made as the team at Bernheim charts Harper’s course back to his summer home in northern Canada.

“Join us as we follow his journey and learn from this amazing bird,” said Wourms. “Bernheim provides these eagles with the large forest expanses they need to over winter, hunt and bulk up in preparation for the migration north and subsequent breeding.”

Harper’s name is a nod to Bernheim’s founder, Isaac Wolfe Bernheim, who made his fortune in the bourbon business selling the I.W. Harper brand. Wourms calls Mister Bernheim a visionary and great philanthropist.

“Mister Bernheim gifted this land to the people of Kentucky in 1929 and we are its stewards,” said Wourms. “It not only provides the public with a place to connect with nature but also provides majestic birds like Harper and countless other wildlife with a place to flourish. We shouldn’t forget that while providing habitat to wildlife, Bernheim also provides clean air and water for communities throughout this region.”

Wourms said larger forest blocks like Bernheim are becoming rare as more than 50,000 acres of land are developed in Kentucky annually.

“Wildlife habitat is disappearing which makes our conservation work even more critical,” said Wourms. “We are always looking at ways to partner with organizations and individuals to protect land and develop corridors where eagles, bear and other wildlife can move without harm.”

Wourms thanked the Beckham Bird Club that helped to fund the cost of the transmitter on Harper.

The research on Harper is particularly fitting as environmental organizations around the world have named 2018 “The Year of the Bird’ in celebration of the 100th anniversary of the Migratory Bird Treaty Act.

“Many consider it the most powerful and important bird-protection law ever passed,” said Wourms. “Bernheim is committed to doing its part to provide a place where birds can thrive.” 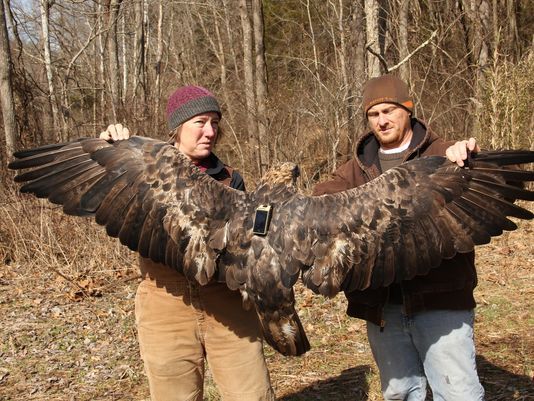