This post was written by Tom Block, Isaac Wolfe Bernheim’s great-grandson and Past President/current member of Bernheim’s Board of Trustees.

In 2019, Bernheim is celebrating the 90th Anniversary of my great-grandfather leaving his incredible legacy, Bernheim Arboretum and Research Forest. As a descendant of Isaac Wolfe Bernheim and a member and past president of the Board of Trustees, I am honored to share some of the story of the Isaac Bernheim I have come to know through travel and research.  It is a true American Dream story of courage, vision and success. This is my first post, and during the coming months I plan to write of his dreams and accomplishments and share pictures I have taken on my Bernheim journey. 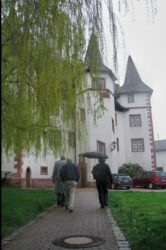 The Bernheim Family story begins in the little village of Schmieheim in the State of Baden in the southwest corner of Germany. My great-grandfather had wonderful memories of the village of his birth, and when I made my first visit there, I quickly understood how this small hamlet in the foothills for the Black Forest would years later inspire him to establish Bernheim Forest.  In his autobiography, he talks of long walks with his wife and their dreams of creating a refuge of peace and beauty for the people of Kentucky.

The village sits on the border with France and for many years was ruled by a French family.  The first picture is of the family’s castle, which is now the City Hall. As part of Schmieheims’s efforts to preserve the story of its Jewish past they have lovingly restored the old Jewish cemetery. The town’s Mayor gave me a tour, which included the gravesite Isaac Bernheim’s father, Leon Bernheim, who died when Isaac was just a boy. In 1929, Isaac returned to Germany to honor his father by purchasing a new larger headstone.

Another high point of my visit was seeing the gravestone of Mr. Bernheim’s grandmother, really emphasizing my deep roots in the small German town. Prior to 1848, Jewish headstones in Germany had to be in Hebrew. The fact that the original gravestone survived two World Wars and the Holocaust demonstrates how the richness of the Bernheim family story.

Throughout the year, I look forward to sharing more of my great-grandfather’s story and his journey as an immigrant who created a living legacy that remains 90 years later.