You are here: Home / 90th / Bernheim at 90: Celebrating the Ginkgo Collection 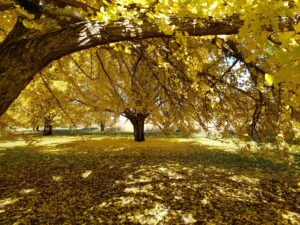 The Ginkgo Collection started in 1954 as 9 specimens, purchased for a cost of $99. Since then, it has expanded to include 16 different cultivars. Ginkgo biloba, commonly referred to as the Ginkgo or Maidenhair tree, can be found in fossils dating back 270 million years but was once thought extinct for a time, until it was rediscovered growing wild in the Zhejiang providence of China in 1869. Ginkgo biloba is the only remaining species in the division Gynkgophyta—all others are extinct. This species is best known for its use in food and traditional Chinese medicine. 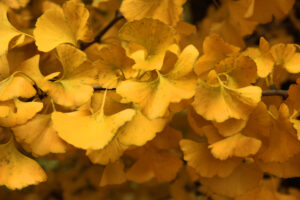 Another very special specimen found in our Ginkgo collection is the ‘Henry Clay’, which was grafted from a female Ginkgo whose seed was presented to Henry Clay by a foreign diplomat and planted at his estate in Lexington around the time of the civil war. Henry Clay is believed to be the first to re-introduce the species to central Kentucky.

Come visit these and other Ginkgo specimens as we celebrate our 90th anniversary here at Bernheim!