You are here: Home / 90th / Bernheim at 90: Celebrating the Beech Collection 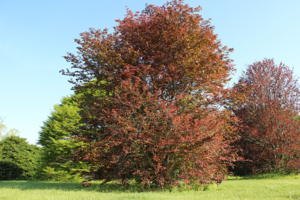 The Beech collection began in 1954 with just four specimens of European and American Beech. Since that time the collection has expanded and now features 18 different species of Beech. There is a great deal of variance among species in the Beech collection, from purple or multicolored foliage to slender, weeping, pendulous, or contorted forms.

The European Beech is the most frequently cultivated species and represents the majority of unusual and distinct forms of that are in production in the nursery market. One of the most striking specimens in the Beech collection is the contorted European Beech, or Fagus sylvatica ‘Tortuosa’. Its thick trunk, contorted branches, and weeping purple foliage stand out among the rest of the collection. This specimen can be viewed in the arboretum loop as you pass the Garden Pavilion on the left.

The American Beech, Fagus grandifolia, is native to Kentucky and has a long history of use in the United States. Prior to colonization, vast groves of American Beech covered the Ohio valley. Because of their specific growth needs, the American Beech served as an indicator of good farm land and was logged heavily by settlers to make room for crops. Historically, American Beech timber was used as a fuel source for fireplaces, the leaves were used for stuffing mattresses, and the ash was used to make soap. Today, it is used to make household items such as utensils, clothespins, and furniture.

Come visit these and other Beech specimens as we celebrate our 90th anniversary here at Bernheim!