You are here: Home / 90th / Bernheim at 90: Celebrating the American Holly 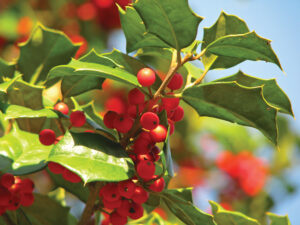 The American Holly, Ilex opaca, is a broadleaf evergreen tree native to the eastern United States. Ilex is the sole living genus in the holly family, Aquifoliaceae. Within the genus are about 500 other species that are widely distributed. These plants have interesting natural forms and an even more interesting etymological background. The Latin “”Ilex” was used in antiquity to refer a species of oak tree, the Holm Oak (Quercus ilex). The Holm Oak has very superficially similar foliage to that of Holly. Both are evergreen, spine-bearing, and hold similarly sized leaves. Through time and various naming systems, “Ilex” has been given to describe the plants we know as “Holly.” 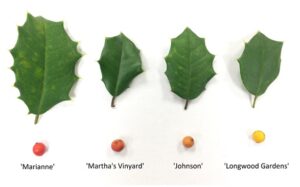 Bernheim has a long history with hollies and is an active participating member of the Holly Society of America. Pictured here are several cultivated varieties of American Holly that have been collected and added to the Buddy Hubbuch Holly collection here at Bernheim. Our collection holds more than 140 cultivated varieties of American Holly alone, and the arrangement to the left highlights variations that exist within cultivated species in our collection. Differences exist in leaf shape, growth habit, and most notably berry color. 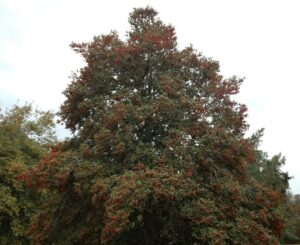 The American Holly can be found popping up in the understory (the trees and shrubs between the forest canopy and the ground cover) of forests in the region and is somewhat common. Our cultivated collection shows the variability of traits that can be achieved through traditional plant breeding.

The berries set late in the season and are present until late winter and sometimes early spring. They are a valuable food source for migratory birds, but toxic to humans. Consumption of the fruit is not advised.

Our collection is a statement in the landscape. Visiting the Hubbuch Holly Collection here at Bernheim will allow visitors to compare cultivars on site, view plant performance, and develop informed decisions when selecting a Holly for planting.