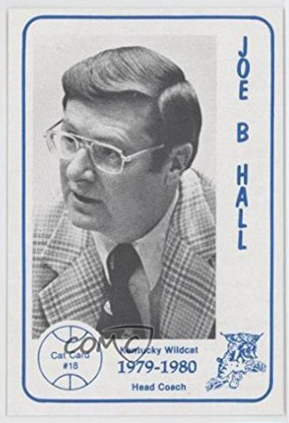 The inclusion of Joe Beasman Hall in a Bernheim blog may seem out of place.  He is one of Kentucky’s best known natives and residents, a long time University of Kentucky basketball coach, winner of 8 SEC regular season championships, a NIT championship, a NCAA championship, four-time SEC Coach of the Year, National Coach of the Year, and a member of the College Basketball Hall of Fame.  He even toured with the Harlem Globetrotters before graduating from college. He is even 90 this year, just like Bernheim.  But a close connection with Bernheim?

Indeed there is. Joe B. Hall began his coaching career at Shepherdsville High School.  He coached football and baseball as well as his beloved basketball from 1956-58 before beginning his famed college coaching career. Second Street in Shepherdsville was renamed Joe B. Hall Avenue in 2010. While he was coaching in Shepherdsville he lived near Bernheim in a house owned by Baker Beam, who later became the long time Master Distiller at Jim Beam. High school teachers didn’t make much money in those days (and they still don’t).  A typical salary in the mid-50s was about $4,000 a year.  During the summer months away from his school duties, Joe B. worked at Bernheim as a ranger during at least two summers.  The Bernheim Employees Workmen’s Compensation Register includes his signature from 27 April, 1957. While employed at the forest, Ranger Joe B. Hall worked under James Lawrence, the Chief Ranger, and Frank Bunce, the Forest Manager.

During that time, the duties of the Bernheim rangers included manning the fire tower, patrolling for poachers and other unauthorized visitors, and greeting visitors at the Contact Station located at the entrance.  It is certain that Joe B. had a thorough acquaintance with all of Bernheim and came in contact with many of our visitors during those summers.  Did he keep his eye out for tall young men that might be interested in transferring to Shepherdsville High School?  Possible.

Joe B. Has returned to the area  many times over the years.  When James Lawrence, his former Bernheim boss, passed away in 2004, he attended the service at Saint Gregory Catholic Church and was an honorary pall bearer along with a number of current and former Bernheim employees. Joe B. doesn’t visit much these days, but Bernheim Forest would certainly welcome a return from the coaching legend.