You are here: Home / Bernheim History / Bernheim and the Great Depression 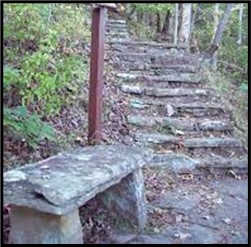 Many people wonder if Bernheim Forest benefitted from the New Deal programs that were implemented to get America’s economy back on track during the Great Depression. The Bernheim Foundation was created in 1929 and the depression years are considered to have started that same year, with the New Deal programs beginning in 1933. While Isaac Wolfe Bernheim did find his fortune shrinking during that period, for the most part work at the forest proceeded in accordance with his plans and the resources he was able to provide. He always planned for the major portion of the trust he established to become available only after his death. As it happened, he lived a long and active life and lived until April 1, 1945, some 16 years after he created the foundation that bears his name.

Receiving assistance through the Civilian Conservation Corps (CCC) would have been difficult. While CCC workers did do some work on privately owned forests, the focus was always on public lands such as national and state parks and forests. Bernheim’s direct involvement in a New Deal related program came through an unusual route. Louisville, like the rest of the country, suffered a horrific level of unemployment. Throughout the decade, the non-farm unemployment rate remained around 20%. Owsley Brown I, the president of Brown Forman, had been for many years competing against Isaac Bernheim’s I. W. Harper bourbon with his own brands including Old Forester.

In 1938, he was also involved with the federal government’s Reconstruction Finance Corporation and interested in local programs that could assist the unemployed. He contacted the president of the Bernheim Foundation, Captain Charles F. Huhlein and other Bernheim trustees and suggested that the Bernheim Foundation offer opportunities to Louisville residents who were participating in the Louisville Municipal Relief Bureau’s program. This program’s aim was to get unemployed people to work on various public works projects. Louisville had so many jobless people signed up that the city had difficulty finding sufficient work for them. The Bernheim trustees took advantage of the offer and on March 8, 1936, the workers began their work at Bernheim.

The Municipal Relief Bureau furnished two shifts of 150-200 men each to work in the forest. Each shift would arrive and leave by train at Clermont for a two-day period each week. The Bernheim Foundation provided the noon meal and the tools they used. Supervision was provided by the half dozen employees that the Bernheim Foundation had working at the forest. Additional help was offered by Colonel Barney of Ft. Knox who promised to provide two officers to assist in supervising. Work proceeded on several projects, such as planting trees and clearing land for the arboretum and the roads that had been proposed. By April 25, it was reported that 7,265 man-days of labor had been provided at a cost to the Reconstruction Finance Corporation (RFC) of just under $20,000 for their pay and the cost of their transportation. An area was staked out to build a camp for the men on Bernheim so that even more work could be performed.

The benefit of this program to prepare the forest for visitors of the future was enormous. In just a few short months, the additional labor available at the forest far exceeded what could be performed in half a dozen years by the regular workforce. Truly a wonderful opportunity, and then it ended. Not because of the expense to either the foundation or the RFC or the quality of the work being performed. It came to an end due to the uneasiness of one man. A resident of Louisville, and the owner of some land near the Jim Beam Distillery, he was concerned that having this many men working so close to his land was troubling. He made his concerns known to two members of the Bernheim Foundation board and, to appease him, the program came to an end. The men from Municipal Relief bureau were sent off to other projects elsewhere, the proposed camp was abandoned, and the six employees at the forest went back to their usual duties.

The development of the forest was impacted but went forward. The forest needed time for the land to heal from years of abuse from logging and the trees to needed to mature. The funding for major projects like the construction of the roads to the fire tower and to Guerrilla Hollow, the development of the arboretum, and the impoundment of Lake Nevin became available after the death of Mr Bernheim in 1945. The forest would open to the public five years later. An opportunity to speed the development of the arboretum and forest was missed, but the vision of Isaac W. Bernheim to create a place where everyone was invited “To re-create their lives in the enjoyment of nature and the many blessings she gives … in the park I have dedicated to the use of the people” moved on.