You are here: Home / 90th / Bernheim – A Lifetime Adventure 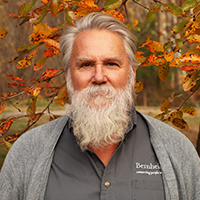 In one way or another I’ve been connected to Bernheim my ENTIRE life. There are photographs of my mother, Barbara Stephens, at Bernheim when she was pregnant with me. My first real memories are of family trips to Bernheim as a kid. We would travel from Louisville in an old Chevy station wagon with parts of two or three families stuffed in. It was back when the back seat in station wagons folded up to face the rear of the car. We would sing stupid songs as we traveled south on the Kentucky Turnpike before it was I-65. There wasn’t an exit at Bernheim where one is now so we would get off at the toll booth at Shepherdsville and take county roads. We knew when we went under the train tracks on the west side of Shepherdsville near the Salt River we were getting close. 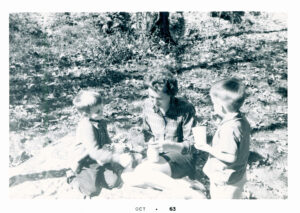 Often a first stop would be the Visitor Center which is now the Education Center. We would listen to bird calls on little cone shaped speakers you would hold up to your ear. There was a bee hive in the Visitor Center and a board with about 30 different sections of wood. That’s where I first learned to discern the colors and ring patterns of different tree species, a talent I have maintained. Then the kids would roll down the front hill while the adults took the many steps from the parking area to the building. Those steps are no longer there but I can still picture them in my mind. Then it was off to one of the trials but our favorites were always the ones that had some sort of access to the creeks where we would muck about stacking stones, damming up rivulets or looking for crinoid fossils. We would take fossils home and sometimes string them up to make totem necklaces of sorts. 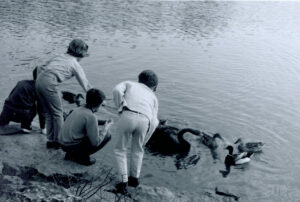 Now I collect a paycheck for coming to Bernheim. I feel very fortunate to have had a lifelong relationship with this amazing place. I am certain that these many acres have helped shape me as a person. They still are.