You are here: Home / Bird Research / Athena Heads North on Migration Towards Canada 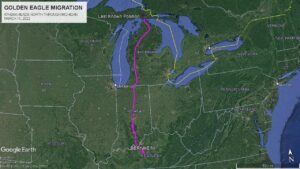 Athena, the golden eagle tracked from Bernheim, has left for her annual spring migration towards Canada. This winter, we followed Athena without her mate, Harper after he went missing last spring near Churchill, Manitoba. We learned how a female golden eagle would behave without a companion to defend territory and help with securing prey and scavenging opportunities. The winter season ended on a hopeful note with Athena headed north on a familiar route.

Since arrival in late November, we observed Athena spending more time outside of Bernheim than in years past. She traveled for longer periods throughout the knobs and forested corridors around Bernheim. Some excursions were as far as 25 miles south of her core range, spending some time near Vernon Douglas State Nature Preserve and Rolling Fork Wildlife Management Area in rugged knobs terrain. She also made more frequent trips to Fort Knox, traveling along the Crooked Creek Wildlife Corridor. Often, she passed over major roads such as Interstate 65, Bluegrass Parkway, and communities such as Lebanon Junction and the outskirts of Elizabethtown. The extended time away from Bernheim may be due to being alone and unable to hold core territory. Another possibility is that being alone resulted in her traveling to find other golden eagles.

When migration began on March 2, Athena was at Fort Knox just north of the Joe Prather Highway. She flew northwest and crossed the Ohio River over West Point before picking up a familiar route in Indiana. There she continued over knobs and forested corridors to Brown County State Park. She doubled back and circled this large block of forest that is frequently used as stopover for the Bernheim golden eagles. While passing Indianapolis, she flew within 5 miles of downtown and topped out at 3500 feet above the earth’s surface. She passed directly over Indianapolis International Airport and Motor Speedway.

In years past, she migrated through Michigan but Athena migrated west of Lake Superior last fall and we wondered if she may choose this path through Wisconsin and Minnesota again. However, she chose the regular spring migration towards Michigan crossing over South Bend and then towards Mackinac Straits. She still has a long way to go after crossing the Great Lakes, with nearly 1000 miles left to go.

Some lingering questions remain for Athena during the upcoming nesting and summer season in Canada.  Did Athena find a companion during the winter season at Bernheim? Some clues were gained just before her migration began on February 23. We captured images of Athena and an unknown adult golden eagle sharing a location just minutes apart. The unknown eagle was slightly smaller, without a transmitter or leg band, and with full adult plumage. The manner of arrival and sharing of the site may suggest that at least the two eagles were tolerant of one another. While the unknown eagle fed, tracks showed Athena sat nearby from a perched location. This behavior was seen in previous companionship with Harper, but it’s too early to say if there is a possibility of pairing between the eagles.

A special thanks to Beckham Bird Club, Cellular Tracking Technologies, Conservation Science Global Inc., and all the supporters of Birds of Bernheim that make this incredible project possible. The support from Bernheim’s members, volunteers, staff, and donors are what allow us to protect wildlife and steward their habitats. Stay tuned as we follow Athena on her migration north.