You are here: Home / Bird Research / Athena completes her migration to Bernheim, reuniting with Harper 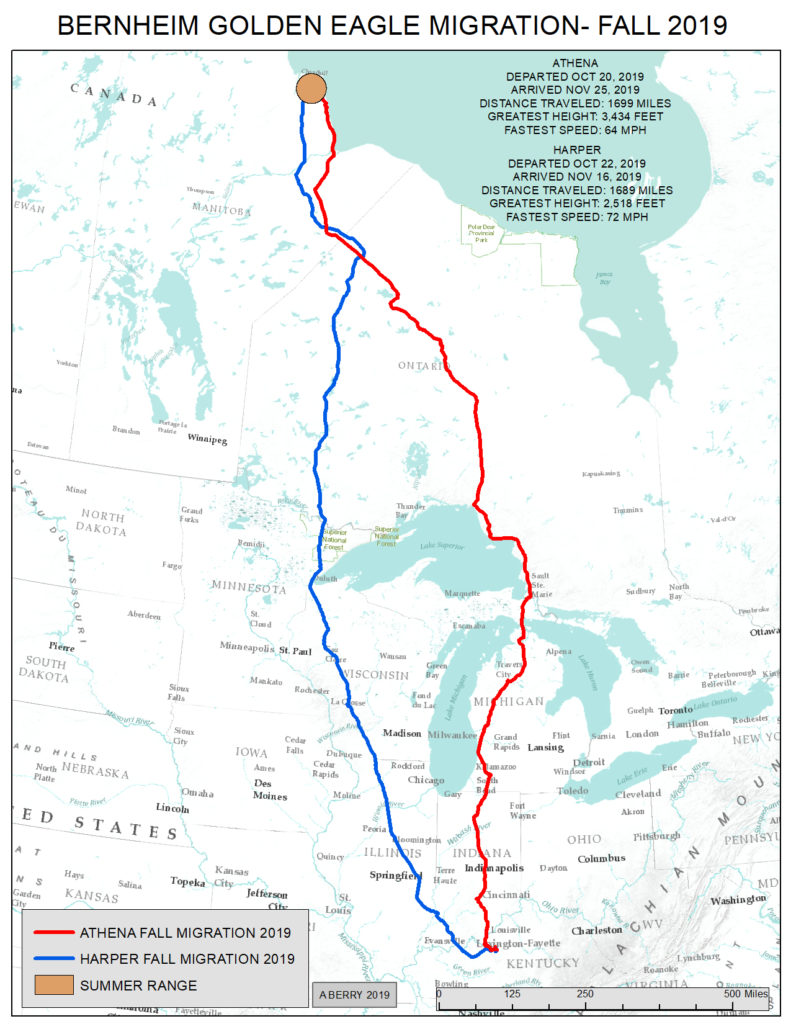 On November 25, 2019, Athena, one of the two golden eagles Bernheim is tracking, completed her migration from northern Manitoba to Bernheim Forest. Athena navigated the final stretch of her migration with precision. She traveled the forested corridors flying over knobs in southern Indiana, using well known natural areas such as Knobtop Trail in Jackson-Washington State Forest, Deam Lake, and Rockhouse Ridge. She crossed the Ohio River near West Point, KY carefully avoiding the town and moving into Fort Knox. Her approach to Bernheim was similar to Harper’s, using the Crooked Creek Wildlife Corridor to cross Interstate 65 and enter Bernheim through Knobs State Forest.

Harper arrived on November 16 and spent time in Bernheim visiting his favorite locations, using many of the same sites as last year. For 9 days he waited alone, possibly looking for Athena to arrive. Athena took her time, stopping more frequently over several stretches in northern Indiana. When she approached Bernheim, we saw her skillful navigation allow her to land directly into an area she spent time last winter.

She waited one night alone in Bernheim with Harper located less than 2 miles away. The next day she took flight and headed towards Harper. It is likely they were calling for each other. She stopped about 1/2 mile away and waited in a tree. After about an hour she suddenly took off and flew towards him. They reunited, then took off and flew together to a high knob. On November 26, 2019, less than 24 hours after Athena’s return to Bernheim, the two golden eagles were back together.

Athena traveled 1699 miles total on her migration, just 10 miles further than Harper’s 1689 miles, using a completely different route east of Lake Superior. They experienced completely different landmarks, weather, and stopovers along their migrations. But the end destination was the same, with central Bernheim Forest being the final location. Imagine spending over one month apart from your significant other, hoping they will return but being unsure about when and where exactly. Not knowing what track, they had taken, but knowing that the plan was to meet back up at the usual spot. It would be a joyous reunion for sure!

How can these eagles navigate with such precision back to the same location? Research is emerging that sheds light on these incredible journeys and have shown birds use the earth’s magnetic field, genetic cues, daylength, landforms, and other cognitive powers to navigate and locate territory. High site fidelity is seen in these golden eagles and many other species. But really, very little is known about how individual birds migrate long distances on separate tracks, then coordinate a reunion on their wintering grounds.

Watching these golden eagles for the past 10 years, I have been amazed at their prowess and intelligence. Our next installment will talk in greater depth about the golden eagle migration, what we have learned, and what remains a mystery. Over the next few months we will begin to explore what happened on the summer breeding grounds.  Stay tuned as we continue to follow Harper and Athena on their winter range in Bernheim.