You are here: Home / Bird Research / Athena Back at Bernheim; Harper Still Missing Since Late April 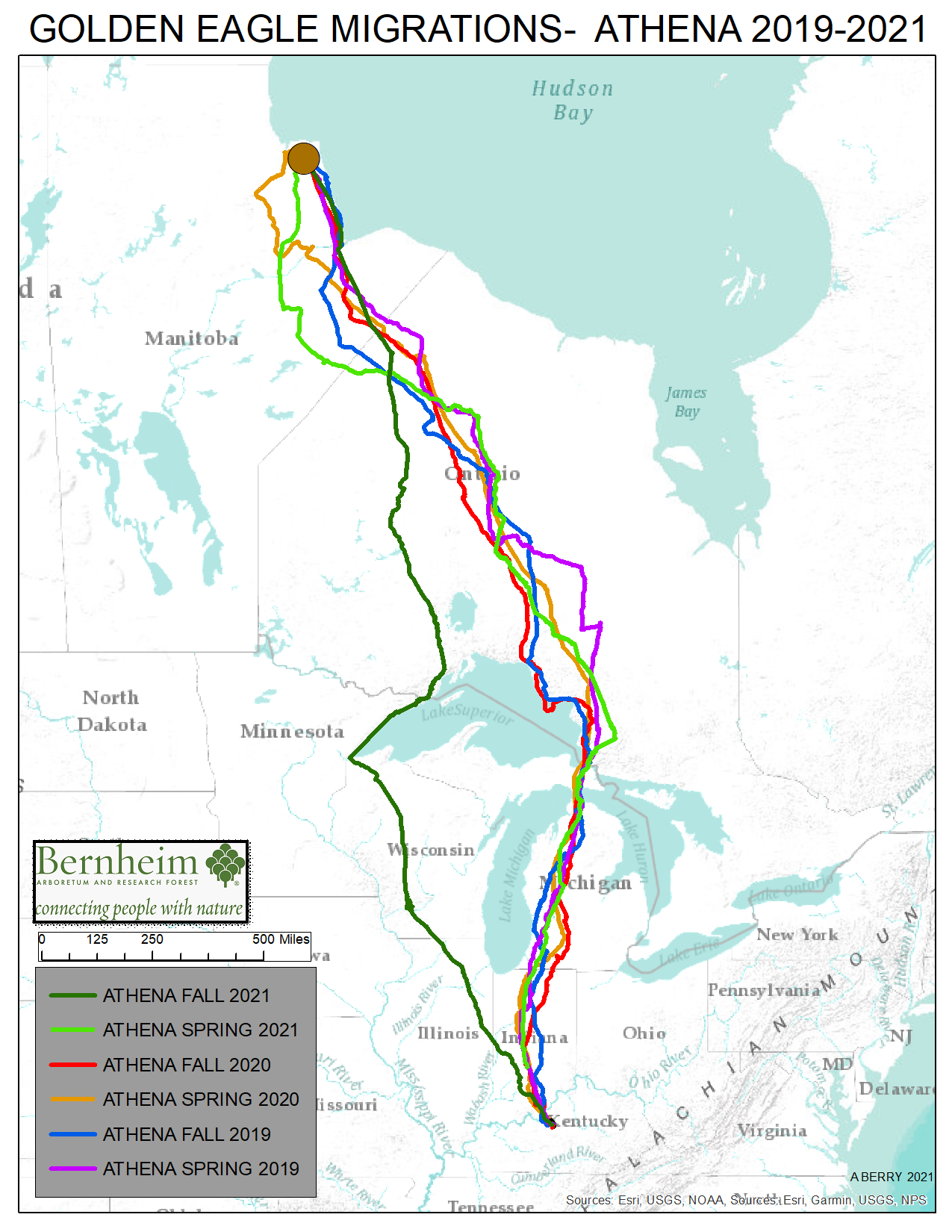 Athena, the female golden eagle, completed her fall migration and returned to Bernheim on November 26, 2021. Traveling nearly 1,700 miles past Duluth, Minnesota, this was the first year that we tracked Athena’s migration to the west of Lake Superior. In previous years Athena migrated east of Lake Superior, through the Straits of Mackinac in Michigan.

Athena crossed the Ohio River at Riverview Park, flying over the Valley Station neighborhood in west Louisville and Fort Knox before ending her migration at Bernheim. Upon arrival, she immediately visited several of her familiar locations within the large forest. Tracked since January 2019, this will be the fourth consecutive winter to follow Athena’s movements on her winter range at Bernheim. This may also be the first year she has been tracked without her mate Harper.

Harper, the male golden eagle, still has not checked in and his whereabouts have been the subject of much speculation. This fall, Athena began checking in on October 24, but Harper’s transmitter has remained silent since April 25, when he was located near an inhabited area of Churchill, Manitoba. During November, we speculated that he may be slow in migration or had a malfunction of his transmitter. Several clues now suggest Harper may have perished last spring in Canada.

When Athena checked in on October 24, her data downloaded from April-October. Her tracks at the nest, and subsequent abandonment of the nest, provide insight into what may have happened to Harper…

Athena arrived from her migration on April 3 and roosted across the lake from one of the two nest sites we’ve tracked in previous years. The next day, on April 4 she first visited the northern nest, then traveled that afternoon to check the southern nest site. On April 6, Harper arrived in Churchill and reunited with Athena on April 7 at the southern nest site.

Harper spent more time this year hunting on frozen marshland near Churchill, Manitoba. On April 11, Harper was hunting nearly 30 miles away from the nest but returned every few days. The eagles spent time together roosting at the nest. By April 24, Athena had settled in at the southern nest location and exhibited signs of preparation before egg laying. Harper continued to fly to Churchill to hunt, making long trips of over 60 miles round-trip to provide food to allow Athena to remain near the nest.

Harper’s final data transmission showed him near Churchill on April 25 at a location just 300 feet from a clearing along the railroad. This area had been frequented by Harper over the previous few weeks, and it is likely he was not the only predator using this site. He may have been hunting, but there is a possibility he was scavenging carcasses. If scavenging, he may have been exposed to lead poisoning, intentional poisoning, incidental trapping, or attacks from other large animals. Golden eagles are top predators but still fall victim to stealth hunters such as humans and other golden eagles.

After April 28, just days after our final data transmission from Harper, we see Athena spending more time away from the nest site and beginning to behave differently. On May 3, she leaves the nest and travels 340 miles on a loop that lasts 12 days. She returns to the nests again through the summer but only for short periods of time.

The tracks of Athena from May- October suggest something happened to Harper. When he did not return, Athena had to abandon nesting due to lack of food during the critical egg-laying period. We might speculate that his absence and lack of food supplements caused Athena to roam widely to find food. Cooperation between both male and female to partition duties is essential for successful golden eagle nesting. It would be unlikely for Harper to abandon the nest site, and if so, he would likely have checked back in. Late April in northern Manitoba is a dangerous place, with frozen lakes, snowy ground, high winds, and low temperatures making survival difficult even for a golden eagle.

With Harper being gone, continued tracking of Athena may shed light on several mysteries of golden eagle pairing. Will she find another mate, and if so, would they return to her old nest site? Can she defend her winter territory at Bernheim, or would she allow a new bird into her winter range? Golden eagles are believed to pair for life, but may seek a new mate if one disappears or is killed. Understanding golden eagle pairing is complicated, but opportunities may exist for finding a mate at Bernheim during winter with other migratory golden eagles visiting.

A special thanks to Beckham Bird Club, Cellular Tracking Technologies, Conservation Science Global Inc., and all the supporters of Birds of Bernheim that make the golden eagle project possible. The support from Bernheim’s members, volunteers, staff, and donors are what allow us to protect wildlife and steward their habitats. Stay tuned as we follow Athena on her winter range and keep your fingers crossed for Harper.

Bernheim is closed on Thursday, November 24.