You are here: Home / Bird Research / April 2019 – A timeline of Harper and Athena’s arrival and nesting in Canada 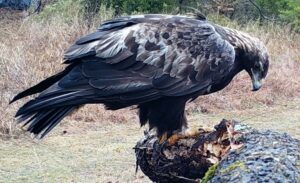 April 6, 2019
Harper and Athena left Bernheim on March 11, 2019 and flew 1700 miles on separate paths. The morning of April 6, 2019, the eagles roosted 26 miles apart in northern Manitoba. At 10 a.m., they both left their individual sites and started flying directly together, reuniting at their destination by flying in from opposite directions within 2 hours of each other. Within 1 hour of their rendezvous, they flew together to the location where Harper spent most of his time in summer 2018, which we presume to have been a nest location.

April 7, 2019
Athena stayed at the nest, making short trips around the surrounding woods. Harper flew off towards Churchill River and Hudson Bay, visiting his old haunts on the Churchill River and coastal areas on the Hudson Bay as we had seen him do in previous years. Harper spent the night on an exposed windswept point looking out at the sea. Both the sea and the land were completely frozen as the low temperature that night was -15 F, but the northern lights display looking north across the Hudson Bay was probably spectacular. Why he would travel so far to spend one night on this frozen seaside location is a mystery, but we know he has made this pilgrimage to the Hudson Bay in each of the three years he was tracked. This is intriguing to me – such a long trip shortly after migration must have an importance we cannot yet interpret.

April 8, 2019
Harper headed back towards Athena who was still at the nest. His flight took him back the 30 miles to another lake, located 3.5 miles away from the nest site. As soon as he lands at that lake, Athena took off towards Harper, where the pair reunited at another nest site. This site would eventually become a central location for the pair over the 2019 breeding season.

Golden eagle nests are called eyries, and in this situation, they appear to be in trees. There are not many large trees on this interface between tundra, exposed rock, and boreal forest, so choice nest sites may be long used and restored every year. Golden eagles will typically have more than one eyrie, and with this pair we see the golden eagles preparing two sites, with a possible third location (which may have been a historic nest) that they visited several times.

Harper left the new eyrie location and traveled six miles south to another lake, where he spent the next the day among wooded cover between lakes.

April 9, 2019
Athena made short trips back and forth in a 400-meter area around this new eyrie, likely collecting materials to build or restore the existing nest. It is typical for golden eagles to have several nest locations and it seemed they were restoring or preparing two sites. With both golden eagles reunited and readying two nest sites, it looked as though they were off to a good start for the 2019 breeding season. Athena then took off to fly back to the old eyrie location.

April 10, 2019
Harper and Athena linked up at the old nest again after several days apart and roost there together.

April 11, 2019
Both eagles made trips from the nest, traveling around the area. It did not appear that any eggs had yet been laid, as both eagles were away from the nest for a considerable amount of time.

April 12, 2019
Harper and Athena traveled to the previously visited third nest option.  They spent four hours around the site, presumably working on securing the spot. This is a best guess, as it looks favorable in imagery and seems to be a location they put some effort into. It may be a historic eyrie they defend, or it is possible it is just a preferred hunting location they both frequent.

April 13- 21, 2019
Athena stayed at the old nest and did not leave the site for ten days. It falsely appears she had settled on a nest.

April 22, 2019
Athena abandoned the old nest, flying back to the other site. Harper joined her there and continued traveling widely, presumably hunting and bringing food provisions back to the new nest site. This behavior is clearly demonstrated in our data, with Athena now settled on this location for her final spot. The eagles had now spent 2 weeks preparing the eyries and chose the final location. For next six weeks, Athena spent most of her time at the nest as Harper traveled widely between lakes providing food.

April 25, 2019
Our first big indication an egg had been laid! Athena left the nest while Harper stayed in her place. Athena was gone for nearly 3 hours visiting both other eyries. After this time, at least one eagle was on nest at all times, indicating that they were incubating eggs.

April 28 2019
Athena left the nest to visit other eyries but only stayed away for one hour. Again, Harper stayed at the nest while she was away. Athena seemed to be checking the other sites to make sure they were still viable options if needed. Harper also visited the other nest sites regularly, seeming to stop to hunt or just checking on the structure.

Another possible reason for his visits is that they must defend the other eyrie from other golden eagles that would want to move into territory. Because these eyries are long used across generations, there is likely competition for these favored sites from other golden eagle pairs and territorial battles occurring that our data cannot reveal.

We know the lakes were still frozen and ground covered in snow, as temperatures averaged only 17˚ F for the month of April. It is uncertain what food sources were being used, but a clearer picture now emerges of how these golden eagles cooperated during the beginning of nesting season. We can assume they were not feeding on the waterfowl yet, as they would not arrive for several more weeks after the lakes began to thaw.

Our data clearly reveals Athena and Harper were making an attempt at nesting during April. The golden eagle pair worked hard for three weeks on two main eyries to increase the likelihood of success, but only one site could be chosen for the incubation period which usually involves laying and sitting on 2-3 eggs. It now seems certain that 2019’s nesting site was different from Harper’s 2018 presumed nesting location.

Stay tuned as we continue to investigate the lives of a nesting pair of eastern golden eagles during 2019. During our next installment, we’ll look at what happened during May and June as the nesting season is now underway.

Thank you for your continued interest in Bernheim, and for the incredible efforts we receive from our sponsors, Beckham Bird Club, and the numerous private donors to the Birds of Bernheim project. We could not do this without your support!

Read introduction to the 2019 timeline.