Home » An Artist in the Family – Amanda Block 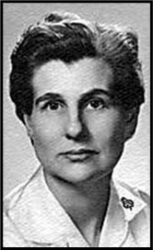 When Isaac Wolfe Bernheim founded Bernheim Forest in 1929, he envisioned art as a core value of the forest’s mission. So, it fits that there was an artist in the Bernheim family.

Amanda Roth Block was born February 20,1912, at the home of her grandparents, Isaac and Amanda Bernheim, in Louisville. Her parents, Albert Roth and Helen Bernheim Roth, were living there while Albert was working on a project for the Bernheim Brothers Distilling Company.

Amanda had a great interest in art from an early age leading her to Smith College in Massachusetts to pursue studies in that field and later the Art Academy of Cincinnati. Her work was limited in the early years as she accompanied Gordon Wolf, her first husband, to Fort Sill, where he was stationed during World War II. They divorced and she married Maurice Block of Indianapolis. She earned a Bachelor of Fine Arts degree from Indiana University’s John Herron School of Art. For the next quarter century, she produced hundreds of paintings, drawings, and prints that were purchased by private collectors as well as museums. Her work has been described as abstract expressionist. For many years she also taught drawing and lithography while on the faculty of John Herron.

She came into one valuable piece of art when she inherited Starstruck by Norman Rockwell from her mother. It was sold by her estate for over $2,000,000.

Amanda lived in Indianapolis for most of her life. Following her grandmother’s death, she visited her grandfather when he moved to California. She was also a frequent visitor to Bernheim Forest in the years following its opening in 1950. Amanda enjoyed a long and productive life and was the last surviving grandchild of Isaac Bernheim. She passed away in Redondo Beach, California, at the age of 99 on November 8, 2011.