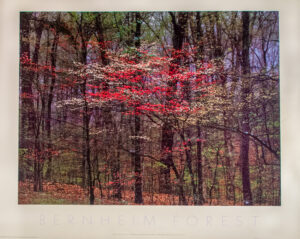 art photography since 1971. A move to the Monterey Peninsula to work for the California State Park Service in 1975 paved the way for his passion for photographing landscapes. It was during this time that he was befriended by famous landscape photographer, Ansel Adams, who admired and encouraged Smith’s early work in color photography. Smith was an Artist in Residence at Bernheim during the initial years of the program, capturing the landscape with perfect composition as images soaked in beautiful light and color. He considers this residency experience a formative time professionally as well as a national recognition of honor.

Smith has been the subject of featured segments on NBC’s Today Show and articles about Smith’s work have been published by virtually every photographic magazine in America. The June 1988 edition of Outdoor Photographer featured an extensive nine page article on Smith that included images created during his Bernheim residency in 1985.

“The Bernheim experience was a very good one in several ways. First, I produced one of my finest portfolio images while in residence. That image, Pink & White Dogwoods, was produced as a poster for the Forest and became one of my top ten selling images during my 45-year career as an American Landscape Photographer. As a result of my visit to Louisville, I had a one-man show at Merida Rapp Gallery which sold out. I have nothing but fine memories of my spring & autumn visits to Bernheim Forest.”

In 2015, Smith converted his Ford van into a comfortable 50 sq. ft. home and has been traveling the country visiting historical sights, museums, and galleries, crossing numerous things off his bucket list. He spends winters in Carmel, summers in Northern California and travels the country during the spring and autumn. Since that time, he has traveled to nine states where he located and photographed 357 tombstones of his ancestors who first came to America in 1774. Smith is currently working on a book to tell the story of his adventures.