You are here: Home / Arboretum / A Few Thoughts on a Pond 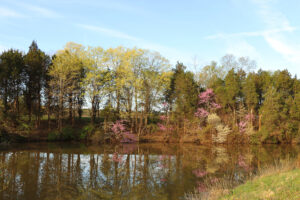 The Olmsted Ponds are one of Bernheim’s iconic sites, a place rich with aquatic wildlife and dancing, dappled sunlight. The ponds were created by the Olmsted Brothers, the successor firm to and sons of Frederick Law Olmsted, considered the United States’ first landscape architect and the creator of, among hundreds of other sites, Louisville’s park system. It’s worth noting that one of Olmsted’s most significant and familiar projects was also his first: New York’s Central Park — a fine example of going big from the start.  Bernheim’s connection to the name Olmsted is worthy of exploration because it ties back to our identity as a place with a history of inclusion and the vision to preserve nature for everyone.

A lesser-known side of Frederick Law Olmsted is that he began as a journalist, embarking in 1853 on a long-term investigative project for what would later become the New York Times. That project was documenting the social and economic effects in the American South of what Southerners euphemistically called their ‘peculiar institution.’ The years of reporting later resulted in the 1856 book A Journey in the Seaboard Slave States With Remarks on Their Economy, the first of three volumes. Before turning his attention to transforming America’s cities, Olmsted would go on to found a progressive magazine called The Nation, which is still published today. He would also later become an activist for emancipation and the establishment of freedmen’s colonies. 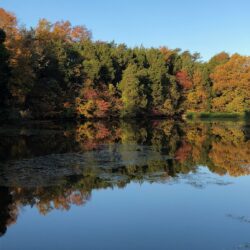 It wasn’t until 1993 that the term ‘resource curse’ came into use, referring to countries with abundant natural resources yet a high level of inequality due to dependence on a single industry. That was Olmsted’s argument in the 1850s about the slaveholding South. Not only was slavery horrifically brutal and wrong, he said, it was preventing the South from being technically innovative and economically diverse — unlike the North. The cotton monopoly addicted the South to single-crop agriculture and made it reliant on imports, perpetuating a stagnant society with a powerful slave-holding elite controlling many poor.

Reading Olmsted’s narratives now in 2020, there’s no shortage of cringing. He used some of the crude language characteristic of the time; not all of his comments would be viewed positively in the harsh light of the present. But he made the effective and original argument that slavery wasn’t just a moral horror that caused unfathomable suffering to enslaved people — it also was a societal disease that dragged everyone else down with it. It was an argument designed to appeal not directly to morals but, more practically, to enlightened self-interest.  The single most important idea from Olmsted’s chronicles remains with us to this day: the oppression of anyone diminishes and degrades every single one of us as human beings. 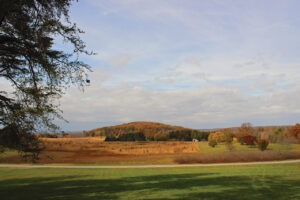 Olmsted went on to create parks for everyone. He saw large urban green spaces as places of respite, recreation and democracy. American cities were still in their youth, but he knew the opportunity to ensure that large pockets of nature would remain within their boundaries had to be seized urgently before it was lost forever. He had the radical vision to see parks as open-air sanitoria, institutions created to serve not just the privileged but to provide the poor mental and physical respite from their crowded and unhealthy living spaces. The vision of a century and a half ago to make our communities equitable, safe and healthy through universally accessible, abundant green space is now more relevant and more urgent than ever.

So the next time you linger at the Olmsted Ponds or any public green space, consider its deeper meaning. Remember that before Olmsted and later his sons began making our green spaces, he spent many years deeply entrenched in the cause of social justice. Remember that the ideal of democracy, equity and universal access — shared by Isaac Bernheim —  is as intrinsic to the parks as the trees, meadows and ponds are. And never forget that this ideal, like all good but vulnerable things, must be protected by all of us — today and always.