You are here: Home / Climate Threats / A Conversation with Professor Douglas Tallamy

I recently chatted with Douglas Tallamy about his efforts to persuade the public to improve biodiversity practices in the home garden. Dr. Tallamy, a renowned author, academic, researcher and advocate, will be speaking live via Zoom event at the University of Louisville July 22 at 6 p.m. Tickets for his talk are available here:

The title of your lecture  — Nature’s best hope — reflects on the idea that people can help restore nature. It’s an incredibly optimistic concept. Can you elaborate?
That’s right. I’m going to give people an assignment. We have two crises on Planet Earth: climate change and the biodiversity crisis. If we had no climate change crisis, we would still have a biodiversity crisis because we humans have not shared our space with other species. Nature is not optional: we depend on it. The biodiversity crisis has been ranked very poorly in terms of immediate problems.

So what actions are you advocating?
The answer to the biodiversity crisis is a grassroots answer. Everybody has to become a conservationist. We’re going to learn to farm biodiversity – we’re all going to become farmers. Landscapes have to be designed in ways that support nature. The idea that humans and nature can’t coexist isn’t true; that’s what’s led to this crisis. We need to start putting the plants back that support nature. Who’s going to do that? You and me! That’s why I say YOU are nature’s best hope. We can save nature and ourselves; or that’s the end of the game. 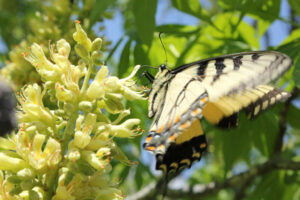 At the center of the issue is the perfect, manicured, monospecies lawn. What can people do to make their home landscapes more supportive of biodiversity?
The earth has huge problems, and most people throw their hands up. But we can shrink the area of the lawn. I don’t suggest getting rid of it entirely — but use keystone plants that support biodiversity, remove the invasive species we’ve already planted. Turn out your lights at night – light pollution is a huge cause of insect decline. Put in a pollinator garden. All these things are easily accomplished by a single person. You increase your property’s ecological value – which increases the value of your local ecosystem. Right now, the way we landscape degrades local ecosystems.

Have you been to other countries and cultures that have gotten this right?
Nope. Nobody has gotten it right. Even though people who have been talking about it for years, the issue has snuck up on the general public. Headlines about insect decline and how many birds we’ve lost are getting people’s attention. I can’t point to any country who’s gotten it right. Europe has done some things better than us, but those countries don’t seem to have a clue about the importance of native vs non-native. What we’re trying to do is change the culture everywhere so that everybody knows that conservation is their own responsibility. Everybody depends on healthy ecosystems, so everybody is in charge of keeping them healthy. Not just a few ecologists or conservation biologists.

How do you persuade people aesthetically – that seems to be the biggest obstacle?
This is the challenge. We’ve got 44 million acres of lawn in the US. That’s a HUGE ecological deadscape. The reduced area of grass you keep can be manicured – you’re just going to have more productive plants in your yard. You’re going to add the oak tree, the pollinator garden. If you don’t like how it looks in the winter, put it in the backyard. Lawn is a default landscape when we don’t know what else to do. There’s so many bad things associated with it. We’re just going to have less of it. Go to any arboretum – that’s exactly what they do.

Any final thoughts to share?
The thing I’m going to stress is personal responsibility: just occupy yourself with improving biodiversity on the piece of the planet that you influence. If you don’t own property, help a park or preserve, a land conservancy. We all have the responsibility, and we just have to act on it.