You are here: Home / Deep Connections with Nature / A Blue Ghost Story 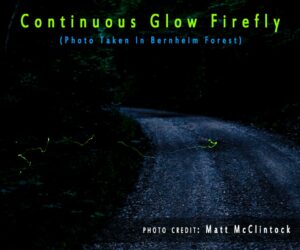 Rain, heavy rain, and in between rains was the weather forecast for our June 7th, 2019 “Creatures Of The Night” program. Not exactly ideal conditions for a program featuring fireflies, but with only one opportunity this year to share the rare “Blue Ghost” firefly with the public, we decided not to cancel the program and hope for a lucky break. This species, Phausis reticulata, is only active for about a three-week period in late spring, making their appearance a special occasion.

Two days before the event, all available spots (17 maximum due to vehicle capacity) were reserved. Then the slow-moving rainy weather pattern set in and a few that pre-registered called back to cancel. Very understandable since the forecast included descriptions like “tropical torrential downpours”. Even with our willingness to go forward with offering the program, how many participants would actually brave the conditions and show up for a rainy night adventure?

When the 9 P.M. program start time arrived, Don and I were thrilled to find 11 hardy guests unwilling to let the weather thwart their desire for adventure. Unfortunately, also at program start time, a new wave of heavy rain had just arrived at Bernheim. Expecting this as a likely possibility, we implemented our backup plan, and started the program with an indoor presentation on “Bernheim’s Bioluminescent World.” If at any time we got a lucky break in the rain, we’d hastily load into the vehicles and head for the Fire Tower to look for “Blue Ghosts”, our featured firefly for the event.

It would be too lengthy to go into much detail about the presentation here, but it contains an assortment of information slides and photos about the fascinating Bernheim Bioluminescent World I’ve had the pleasure of discovering over the last decade. A few of the highlights included:

During the presentation, we enjoyed a lively conversation about all things firefly, and I was happy as a possum eatin’ a sweet tater.

I checked the radar about every 15 minutes, and when I saw a short break in the rain coming, I knew it was now or never to go see them live. So we quickly loaded up and headed for the Fire Tower.

The drive up to the Fire Tower was interesting. Along the drive, we encountered some areas of dense fog, rarely seen on our night programs. Over the years I’ve led night programs in both extremes of cloudy/clear conditions, but never before under such rainy conditions.

Night at Bernheim is not as straight forward as you might think. Before the invention of electric lights, a cloudy night would always be darker than a clear night. But in our age of electric lights, regardless of the moon phase, cloudy nights in Bernheim are actually very bright compared with a cloudless, clear night. Why? Local light pollution travels up into the sky, then reflects off the base of the clouds, then back to the ground producing enough light, once your eyes have dark adapted, to easily see without a light source. But on this night, a combination of many things (rain, ground temperature, low clouds, patchy fog, etc . . . ) made for one of the truly darkest nights I’ve ever experienced in Bernheim. This could be very good for firefly viewing, that is if they’re active in such wet conditions. We didn’t really know for sure. 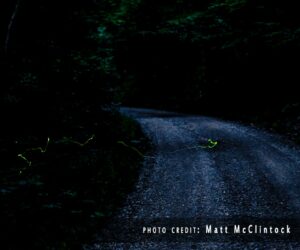 We parked at the Fire Tower parking area and hiked about midway up the trail to the Fire Tower. In the past, this has been a great location to view the “Blue Ghost” Firefly. Unlike the fireflies most people are familiar with, this species doesn’t flash, but instead displays a continuous greenish-blue glow and slowly flies around the trees in the forest, a few feet above ground level. They really do remind you of little fairies flying through the forest. After we were all in a sure-footed position, we turned off all our lights. . . . Whoa . . . it was dark. I mean it was “can’t see your hand in front of your face dark!” The group went silent for a few seconds, then I heard a couple of whispers from the group expressing their astonishment at the total darkness. I immediately asked if everyone was doing okay, just to be sure everyone was comfortable with the situation. Fortunately, not only were they fine with it, they were really enjoying it.

Very quickly our eyes began adjusting to the darkness, and fireflies flashing high up in the tree canopy became obvious. With each passing second, the more our eyes adapted to the dark, the brighter this forest fireworks show appeared. But even after a few minutes, and our eyes working hard to adapt to the dark, it still wasn’t possible to see a person standing right next to you.

We all stood there in the dark just taking in the moment. Being in an inky black dark forest with fireflies flashing all around is certainly not a common experience for most people these days. I thought of all the Bernheim visitors that walk up this trail to the Fire Tower during the day, yet they will never know this other-worldly, enchanted night forest of Bernheim we were experiencing. Shockingly, far more people have been to outer space than have visited Bernheim to see our “Blue Ghost” firefly.

However, after about a solid 5-7 minutes, we hadn’t seen a single “Blue Ghost” and I was getting concerned we may not see any! Feeling like I should start acknowledging that fact, I pointed out that we had yet another environmental factor working against us tonight, a frequent strong breeze. I reiterated how tiny “Blue Ghosts” were, much smaller than fireflies typically seen in subdivision backyards, and a strong breeze could make it difficult for them to maneuver.  As I was about to turn our attention to the Fireflies we could see flashing in the treetops, which were spectacular in their own right, someone suddenly exclaimed, “I think I see one!”.

Slowly, but steadily, specks of greenish-blue light flying low to the ground around the trees were beginning to appear. Their lanterns would occasionally go dark for a few seconds but then illuminate again for 30 to 45 seconds at a time. While we didn’t see as many as I’ve seen during past programs, we had a solid “Blue Ghost” firefly performance before us, with them coming fairly close to our location on one occasion.  Everyone was thrilled at the experience we were sharing together. The fireflies had opened the doors to joy, magic and a deep connection with nature for all.

One more interesting thing happened while we were standing there in the dark. At some point during our night programs, we always mention light pollution and its impact on both animals and people.  It just so happened on this night, co-leader Don Spain had stayed with the vehicles and innocently turned on his handheld flashlight for a short time. keep in mind, we were a considerable distance away from Don and he never pointed his flashlight directly at us. But one small flashlight, reflecting off the side of the white vehicle, had a massive impact on our firefly viewing experience. It only took a few seconds before the group was commenting on how they wished he’d turn the light off. This accidental moment proved to be the single best demonstration we’ve ever managed on how unwanted light pollution can be when you’re trying to enjoy the dark. I seized the moment and reminded the group that for us the light pollution simply diminished our enjoyment of the view, but for the fireflies, it was a matter of life and death.

Bernheim offers an assortment of night programs throughout the year featuring astronomy and nocturnal life. Come join us and you’ll discover the dark side of the park is actually noisy, busy and bright . . . but in a good way!